After Monday's climbing, it was time for a lot of down.

It was a cold night up at 1100m, I had to pull my sleeping bag right around me and was very reluctant to get out of it the next morning. 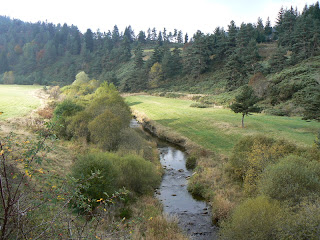 I left and followed the Espezonnette to Lanarce, where the pain au chocolats were perfect. They were big, suitably flaky on the outside, fresh on the inside and made with good chocolate.

There was little choice but to get back onto the N102 for a bit, unless I wanted to go many miles out of the way. It looked bad on the map, as the turning off the road was at the top of Col de la Chavade and I am very averse to big climbs on big roads, but the road was quiet and the climb quite gentle. I turned off the road, and so began the real climbs for the day.

The road reached 1435m at the top of Col du Pendu, my maximum altitude for the trip. A small group of wind turbines gently rotated at the top, the only ones I had seen on the trip, and I passed a Nordic ski station. 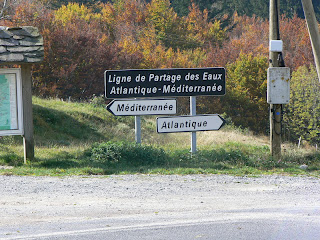 I climbed back up to 1370m, and just past the top, on a lookout platform over the vast valley into which I was about to begin my descent, I met a German couple with bicycles, who were headed in the other direction. They were mostly unladen, and were day-tripping from a fixed base. They spoke good English, and told me that they came to the Ardeche region every year to go cycling and walking, for which I can hardly blame them. This year, however, they were both on sabbaticals from work and were planning on travelling with their bikes in Cuba and South America (Chile, Argentina, Patagonia) - I was very jealous of their great plans. I did not forget that it is only polite, when meeting a person of the German persuasion, to congratulate them on their country's excellent eiscafes. 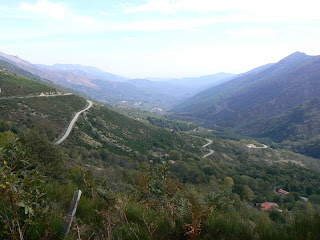 The descent was amazing. Miles and miles and miles of downhill, losing about 8-900m in altitude, a chilling drop along proper hairpin mountain passes, some of which were unfenced, narrow and slightly terrifying. I travelled for miles through pine forests and ripe chestnut trees, along and down the valley, at the bottom of which lay my first Mediterranean tributary, the Beaume.

The road levelled out, and I stopped in a picnic area near Valgorge for my lunch, sharing the bench with a small lizard. The bread, butter and cheese were lovely but then I ruined what had so far been a great day by tragically snapping my spork in two. After that, there were a couple of small hills to get over, but after the big descent my legs had forgotten how to pedal. 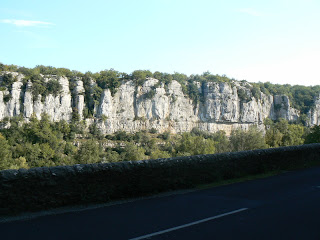 Passing through Largentiere, I then met the Ligne river and eventually the Ardeche, which is where things started to get really spectacular. The road ran along a wide gorge, with pale limestone cliffs ascending on either side. At one point the road ran through a short tunnel built into the cliff, the outer side of which had been carved into a succession of pillars and "windows". It turned out to be a small taste of what tomorrow would have to offer.

I stopped at Ruoms, which was a bit of a ghost town, few places were open and most were "closed until April". I stayed at a hotel of slightly dubious decor and reluctantly ate at the restaurant downstairs because there wasn't much else around, however the food turned out to be excellent. I retired to my room and watched French Supernanny.

1435m is not very high. If you want to read about some cycling at real altitude, check out Occupied Territories, Peter Quaife's account of riding in Tibet this summer. Most of it happens at around 5000m.
Posted by Hel at 11:10 am

I realised while writing this that I think of distances in miles but altitudes in metres. It's great, this way I get to confuse both US and European readers!