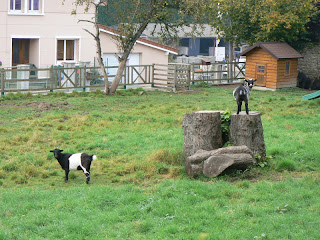 My parting gift to Frances and George was two bulbs of garlic and about 900g of sugar. Being alone, and wanting to travel light, a single bulb and 100g of sugar were more than enough, but it's impossible to buy in such small quantities. I hope they appreciated the generous donation anyway.

I filled up on baguette, jam, warm croissants, coffee and orange juice at breakfast. I was running dangerously low on porridge supplies and had yet to see any in the shops, but Frances assured me that it was available in some larger supermarkets, and should become more available as I got further south.

One of the topics of discussion the previous evening had been the Puy-de-Dôme, a huge dormant volcano in the Auvergne region. A road leads all the way up to the summit, from which apparently the views are spectacular, and the mountain has occasionally been part of the Tour de France. I decided I had to climb it.

I entered the Puy-de-Dôme departement and headed for Pontaumur to try to get campsite lists. The tourist office had closed for the day, so I headed down the D217 towards Pontgibaud, which looked a bit bigger. The road was marked as scenic on my map and turned out to be absolutely lovely. 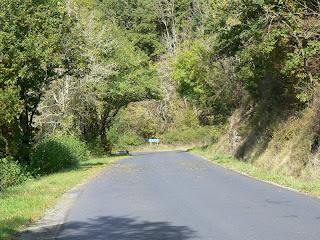 I stopped for lunch half way up the ascent from Pontaumur, the town just out of sight and hearing. Rocky cliffs ascended on one side of the road, and on the other side a stream gurgled along in the valley below. Autumnal trees shaded the road from both sides and shed tiny golden leaves, from which gusts of wind would create little yellow storms. The occasional passing car stirred up the leaves and caused them to flutter along on its wake.

There were four ascents on that road, but the first was the longest and loveliest. The final climb was into la Goutelle, which was bigger than I expected and had a campsite which claimed to be open until the end of October, so I stopped and pitched up, after which I noticed that all the facilities were locked and the taps weren't working. I wasn't too bothered as I had everything I needed and could buy bottled water at the shop over the road. There was also a fantastic boulangerie/patisserie nearby, from which I got a slice of pizza and a delicious little tarte au citron.

I was about 20 miles away from the Puy-de-Dôme and planned to get away nice and early the next morning to get a good early start on the climb.
Posted by Hel at 12:17 pm