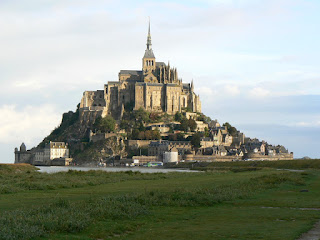 I decided to take Wednesday off to visit Mont St Michel, and it was well worth it. I walked along the footpath on the mud flats, over to the not-quite-island that is the mountain, and into the narrow cobbled streets of the town.

The abbey proved an excellent way to spend a morning, with its fantastic views over the surrounding mud flats from the terraces and self-guided tour of the church, cloisters, refectory and other atmospheric and beautifully constructed rooms.

The abbey had to be designed around the steep rocky slopes of the Mount, and it is an impressive feat that the 13th century architects and builders were able to create this carefully-crafted three-storey building around the huge granite pyramid that is Mont St Michel, supported by strong buttresses and designed so that the upper layers are as light as possible.

It started to get a bit drizzly when I came out of the abbey at about 11. I tried to get my first crepe au citron but nobody was serving crepes till lunchtime so I started to wander back to the campsite. As I left the town, a fellow tourist approached me and asked me to take a photograph of him and his buddy... with their car as the main backdrop. I'm sure that'll be a fond memory for them to look back on...
Walking back, along the road this time, I noticed sheep upon the mud flats. These are salt marsh sheep - agneau pré-salé (salt marsh lamb) is a local speciality, the meat being very well flavoured.

I encountered my first fellow cycle tourists, a group of three riding towards the Mont as I made my way back, and said hello as they passed.

Lunch was bread with a lovely and rather creamy local cheese, Cremeux du Mont St Michel. I made the most of the afternoon to do a bit of washing, not that I had accumulated much at that point, and not that it had much chance of getting dry. I picked up French Marie Claire at the supermarket and started to read it with the aid of my French dictionary. They did have a couple of English papers and magazines but they're quite expensive and don't last anywhere near as long!
Posted by Hel at 9:13 am