My legs were tired after the Gorges so I decided to take it easy again, and this wasn't too hard now I was out of the mountains. The real challenge now was to keep things interesting after the high of yesterday's incredible scenery, but at least now I had a handy leaflet to help me. I'd had some thoughts about visiting Avignon, on the advice of my lunch companions the previous day, but there was a lot of traffic around and I didn't feel like going into a town that big. Pont du Gard looked like a better bet, a Roman aqueduct spanning the Gard river, so I headed straight south. 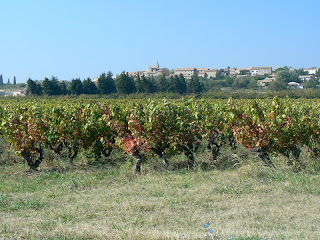 I crossed the Ardeche river into the Gard departement. Huge cliffs faded away into vineyards and gentle forested hills. It was a sunny and cloudless day and warm herby breezes filled the air. There were a couple of small foresty climbs, mostly to keep me away from the bigger roads, as the traffic had started to get quite busy.

Bagnols-sur-Ceze was a bit of a trafficky hell-hole, I got there around mid-day and couldn't leave fast enough, but I did manage to stop at the tourist office and get a booklet of campsites in Gard. Again facing a lack of road options, I joined the N86 for a downhill ride towards Pont du Gard. As I'd hoped, it was nice and fast and I easily did 20mph for most of it.

The Pont du Gard was beautiful and very impressive, but was also swarming with tourists - it felt like a bit of a cattle market and at 3pm was way too bright to try and get a nice picture, so I left and found a campsite nearby in the hope of meeting the Pont at a quieter time.

Having grown tired of my own lousy cooking, I was getting into the habit of eating out. The campsite restaurant had closed for the winter so that evening I rode a mile to Remoulins for dinner, which was a lovely meal at the pizzeria (Lou Cigalon, 30210 Remoulins). Restaurants don't normally start serving until about 19:30 so I ended up having to ride back in the dark, which wasn't a problem until my front light (a SON dynohub setup) suddenly became very erratic in its output. Figuring it must have a loose connection, I bashed and jiggled a few things (it was dark, hardly the time for precision engineering!) but it didn't right itself. This was the beginning of bad times for my dynohub...
Posted by Hel at 9:59 am