It started to rain almost as soon as I was out of the front gate.

Not proper rain, just fine misty drizzly rain that barely even counts but makes things damp and is rather annoying all the same. I managed without a raincoat for several miles until it picked up a little, and continued in the same vein all afternoon. This meant that, despite the loveliness of the Dorset countryside, I wasn't able to see much of it, and the camera stayed warm and dry inside.

The route was mostly flat for the first few miles, then I hit a small steep hill at Hartgrove, followed by a long steep climb up onto Cranborne Chase at Fontnell Magna. After that, I followed the river Tarrant and then then the Stour downstream, so it was a nice long gradual downhill all the way to the sea.

The roads were quiet country lanes until Wimborne, where there was no choice other than to take bigger roads, so I started out on the B341 to Poole. As soon as I entered Poole Borough, I was swept off into an offroad cycle path, with no idea where it took me but my compass told me it was roughly the right direction so I followed it. It's nice to have cycle paths, but the creators should consider that cyclists need to know where they're going too!

I ended up a bit too far into Poole, but found my way to Mo and Mark's house where I was given a hot shower and the use of a tumble dryer, thoroughly fed with lasagne and entertained with cute babies and games of Scrabble until it was time to leave for the ferry.

At the ferry port, due to foot and mouth worries I was force to surrender my filthy English cheese (no doubt the ferry port people save it all up and have a great big cheese party every evening). The checking-in people had bets on whether the cyclist would show up, what with all the drizzle. Hell yeah! The boarding folks kindly let me stand under a shelter while waiting for the ferry to be ready, and held the cars back while I rode up the ramp. 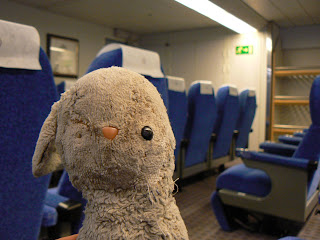 On board, I went straight for the reclining seats as I was tired from all the Scrabble, and keen to grab as much sleep as I could on the six-hour crossing. The seats weren't as comfy as the ones on the Santander ferry, and the lights in the lounge didn't switch off for about an hour.

I was just drifting off when two people sat down directly in front of me and started chatting - fortunately I was able to move as the ferry wasn't busy. I slept for a few hours on my new lightweight pillow, which proved quite comfortable, but I ended up wishing I'd brought my sleeping bag as it was slightly cold. My sleep was blissful and undisturbed as I dreamed of burning ferries.
Posted by Hel at 11:33 am