I was very nearly there. I left the hotel at sunrise in the hope of getting away before the traffic started up. It was still heavy but much better than it had been the previous afternoon.

Heading into the city, the suburbs reminded me of parts of North London, lots of immigrants in headscarfs (presumably mostly from North Africa), and streets of shabby looking buildings housing dodgy kebab shops and pizzerias.

It should have been a straight down-the-road kind of deal but somehow I must have veered off in the wrong direction as I ended up quite lost and going round in circles. A nice chappy in a car stopped to offer help, and we decided that I was way too far east of where I should have been. After that, I started relying on compass direction only, and soon was following signs to le Vieux Port. 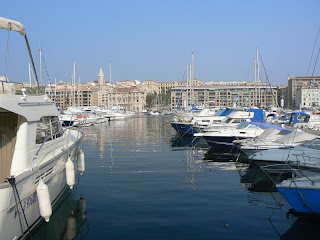 I was there before I knew it. It took a while to sink in that I'd finally reached the Mediterranean, and was staring in the face a whole different sea from the one I'd started on.

I'd arrived at about 10am, and with several hours to kill before the ferry left, I took a bit of a wander around. The port was packed full of fishing boats, yachts and small ferries. There was a fresh fish market featuring all kinds of delightful wiggly tentacled things and ugly monkfish. North Africans were selling sunglasses and hideous blingy watches.

I went for a citron crepe which was disappointingly sugary and not nearly citronny enough.

I was just about to get some lunch when I was approached by a young couple, Eva and Julien. They were fellow travellers, French and Canadian, and had recently completed a bicycle trip from Vietnam to France, making my just-completed journey across France seem puny by comparison. They were very friendly and it was a real pleasure to meet them. We exchanged details and I have heard from them since, they are now planning a ride across Canada. You can read more about their travels and see some fantastic photographs on Eva's Myspace page. 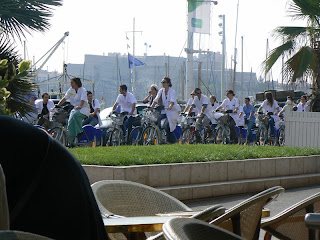 During lunch, hundreds of people in white coats rode past on bicycles in some kind of a protest march. I later learned that they were protesting about proposed restrictions on where doctors are able to set up practice, and that they ended up getting what they wanted. A busker sang and played his guitar outside the restaurant - he went around asking for money afterwards. I gave him a euro because, unlike my lunch, he was quite good.

I had a bit of a look around the Old Port area, which was pretty cool but it's hard to do much in a big city with a bikefull of stuff in tow so I was quite glad when it was time to go to the ferry. I had one hell of a time trying to find the right bit of the Gare Maritime, they seem to have rebuilt, moved things around and forgotten to signpost it all. I found a French chap who was also looking for the SNCM terminal, as he was headed for Sardinia. He said that Sardinia was much less touristy and less hilly than Corsica.

As I sat and waited for the ferry at the terminal, a succession of different characters stopped by to share my bench.

The next guest was far more welcome, a nice middle-aged lady from Normandy, whose husband had recently died, and she was visiting her mother-in-law in Corsica. She helped me to pronounce "Cherbourg" correctly (the "bourg" part is a deep sound, and very pronounced). I like it when French people talk nice and clearly in their own language, rather than speaking too quickly, assuming you don't understand any French, and resorting to English.

Next up was a lean older gentleman who told me I had a nice bike, before promptly departing for his ferry. That't the kind of compliment I can take.

I was loaded onto the ferry with the foot passengers, via a minibus onto which they insisted loading my heavy bike. Marseille port is huge, and it was a ten-minute drive from the terminal to the ferry, so I was quite glad of this.

The ferry was pretty cool. The Monte Cinto is a small boat, only carrying about 100 people maximum, and on this crossing there were only about 20, so there was a nice friendly atmosphere. The chaps on reception were evidently a little wounded about France's crushing rugby defeat as, when they had trouble figuring out how to put my credit card through the machine, there were mutterings and shakings of heads about "les Anglais... nothing but trouble...".

I was invited to join three friendly French truckers for dinner, they seemed to make the crossing quite frequently and as far as I could tell they were transporting bales of hay over to the island. Dinner was good, but the best bit about the ferry was the wine tap in the canteen - a huge wine machine lined up alongside the orange juice and coffee machines, and offering a choice of red or rose. I thoroughly approve of such things, but I'm not sure it'd work so well on an English ferry.
Posted by Hel at 11:36 am