It's amazing how noisy pots and pans can be at 6am on a campsite where the only other campers kept you up by talking until 1am. 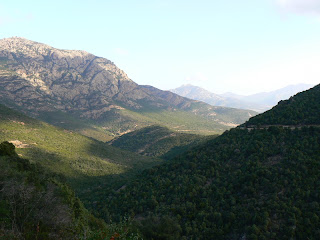 I left Galeria and headed up into the mountains which form the divide between the two departements of Corsica, Haute-Corse and Corse-du-Sud. Some of the peaks in this chain rise to over 2500m but the D81 only reaches an altitude of about 400m - nevertheless, it was a tough morning. After crossing the border I dropped down towards the Golfe de Girolata, the red rocks of the Scandola Nature Reserve visible in the distance.

The road wound its way slowly through the rocky landscape, narrow threads of tarmac clinging to steep pink granite cliffs. Cows wandered around in the road. Corsica is home to a particularly small breed of cow, and the babies are tiny, possibly even tinier than the mini-moos we found in Dorset on our last trip. However, they are not the smallest cows in the world - that privilege goes to an Indian breed called the Vechur cow. 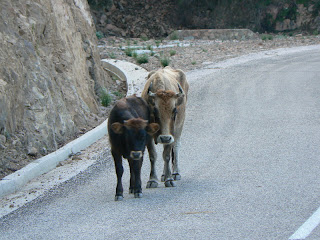 Having, in the not so distant past, had a cow run directly at me because it was trying to escape a larger moving object, I am somewhat wary of meeting cows that up-close, especially when there's a third party involved, i.e. a huge camper van coming the other way. I stopped a good distance away until it had passed, and the driver rolled down his window and asked whether I was afraid to pass the cow. I'd be in a bit of a mess if I was...

Another climb took me over Col de la Croix and towards the Golfe de Porto and I dropped down into the incredibly pink town of Porto for the night.
Posted by Hel at 11:36 am

Got to watch those cows.