A lesser form of travel

We arrived back in Portugal last night after spending three days driving here from Guildford, via the Dover to Calais ferry. A lot of this was boring (and sometimes expensive) motorway, but the best parts were spent following our cycles routes, either in reverse for the first part of France, or just as we did a few months ago across Spain.

It is an interesting mix of pride and astonishment to see exactly how far we travelled each day. 50 miles a day may not sound like much but even in the car we would be lucky to do that in an hour. The hills aren't any less deceptive either, I actually checked to make sure my hand brake wasn't on at one stage, then released we were going up the same climb that had caught us out last time, it really looks flat but the engine was struggling and telling me otherwise.

Yesterday we were in Spain for the sunset and it was absolutely gorgeous. Most of our route across was stunning, and on lovely quiet roads too. If only it wasn't so far from England, and so sparse on the camping ground front. Of course we didn't even try to eat there, we know better than that, so we had an early lunch in France and a late dinner in Portugal. Since we had another chance to check out a recommended restaurant - just down the road from the campsite between the border and Braganca, we stopped there and had a really good meal. It was a little pricey but not a rip off at all. We had soup followed by wild boar and were regretably too stuffed for pudding.

Arriving back in Valpacos didn't go quite as expected. Our hosts need their room back, they kindly put us up for the night (we arrived gone midnight) but we will be on our way again today once we have packed everything, including the bikes. We just need to figure out where we are going now and then how to get there. It was freezing in the room last night but having duvets this time helped no end. Apperently it is too cold to bark, we didn't hear from Inca at all and went to check she was still there and alright this morning. In fact it was lovely and quiet and probably the best nights sleep we have had here so far so was a fitting send off.

We have lots to arrange now so had better get on with it, but not before a breakfast cake.
Posted by dgym at 9:46 am 8 comments:

We have been back in the UK for two weeks visiting a few people and getting some peace and quiet from that damn dog. It was a long and tiring journey involving a four-hour bus trip to Porto, a flight which reached Stansted at 11:30pm, a very long and slow queue for passport control and a long wait for the bus to Heathrow at 2:25am followed by another long wait for the bus to Woking, which dropped us off outside Woking Station at 6:30am. By this time it was raining so we hurried down the road to shelter outside Rachael and Pete's house until what we considered to be a good time to knock on the door and wake them up (about 7am, of course they may disagree about that being a good time :)

Despite all the things that we don't like about the UK, it was unusually good to get back and indulge in things like showers that are hot for more than a minute, (relative) peace and quiet, a change of clothes, and of course heavy traffic, miserable weather and winter colds.

We're not planning on spending much longer in Portugal - the house is cold, leaky and noisy and we're no longer considering a permanent move there, so we need to move onto other things (quite possibly France, but more about that another time). But we still have stuff there, including our bikes, so on Wednesday we are leaving again for Valpacos, with a car so we can transport the bikes and everything else back to the UK.

We'll probably be in Portugal for a couple of weeks this time, during which we plan upon inflicting Typical English Food upon our housemates. This is what we have so far: 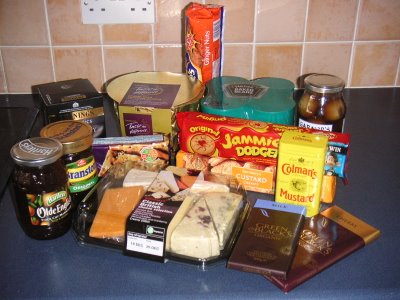 Any further suggestions welcome, bearing in mind that this has all got to survive a car journey through France and Spain, so that battered cod & chips just ain't gonna make it.
Posted by Hel at 1:01 pm 3 comments: