I woke at midnight, hungry. I'd cooked my own dinner again, unidentified ravioli, and throughout the course of the meal had become increasingly convinced that the unidentified white tasteless contents were tripe, though in retrospect I think it was probably sheeps cheese. I munched on baguette and goats cheese until I was able to sleep again.

At 6:30 I woke, packed and left. Despite not having to travel so far in Corsica, it was still nice to get it all out of the way before the afternoon sun set in. 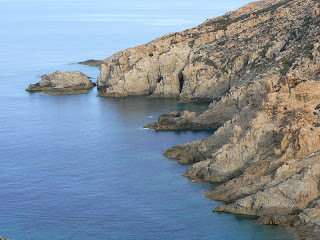 The coastal road between Calvi and the village of Galeria was wiggly, quiet and mostly devoid of civilization, aside from the occasional hotel or snack bar, most of which had closed for the winter. The section around Pointe de la Revellata was particularly beautiful, the blue sea contrasting with sandy-coloured rocks and green shrubs. After that the road turned inland for a while and the road surface became very bumpy and poorly-maintained, making for some quite hard riding.

Galeria was very small but had a supermarket, campsite and some restaurants. The campsite was populated by shy woodpeckers, which I could hear tap-tapping away, but every time I crept close enough to find the source of the tapping, it would stop. I caught a glimpse of one or two, they are beautiful birds. I'd only recently been reading in my French science magazine about how well-engineered woodpeckers are for their job - membranes over the eyes to protect from wood chips, a very small brain enclosed by a thick spongey skull to minimize risk of concussion from all that headbanging, strong neck muscles, and an incredibly long tongue that wraps all the way back around the bird's skull. 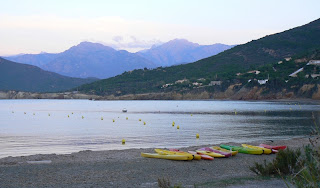 The sparrows were a little bolder and pecked around for crumbs after I'd finished lunch.

I had a lovely dinner at a nearby restaurant, monkfish with creamy green peppercorn sauce, saute potatoes and deep fried courgette rings. I returned to the campsite to find I had company, a group of teenagers who sounded drunk/stoned and were talking, farting and giggling until late. We were the only campers, so at about 10pm I asked them in my very best French to please shut the hell up, they made a bit of effort at first but kept going until about 1am.
Posted by Hel at 12:04 pm