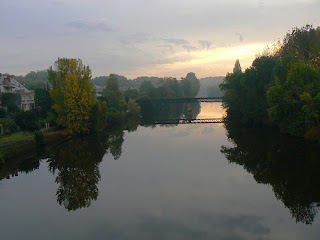 The Creuse river was still, cool and beautiful as I crossed over it first thing in the morning. I left the river and embarked on my hilliest day yet. The uphills were long, mostly gentle, winding and slightly sweat-inducing. The downs were long and fantastic.

Having just left Centre and entered the Creuse departement of Limousin, I had run out of campsite information so stopped at Dun-le-Palestel and waited for the tourist office to open from its lunch break. (In addition to Mondays, the French are also keen on closing their businesses at every other opportunity as well, most notably for at least two hours at lunchtime).

Whilst waiting, I called dgym from a nearby phonebox. He was able to call me back via Voip, which was much cheaper than any other means of phone call we had tried but the quality of our home internet connection made it harder to hear what he was saying. By that point I had given up all hope of my international SIM finding a network ever again, and my mobile situation was not helped by the fact that the wiring on my solar charger had mostly fallen apart. Touring equipment needs to be really heavy duty - things are constantly being stuffed into and pulled out of panniers and generally knocked around. The solar charger worked well until it fell apart, and we are confident that with more robust construction, it will do a great job on future tours. 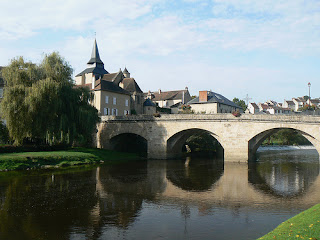 I got the campsite booklet, and once again had the choice between a nearby campsite which finishes the cycling day a little early, or one 30 miles away. At the kind of speeds I travel at, and with the amount of daylight available at that time of year, and the need to set up a tent and cook, I usually prefer not to set off on a 30 mile ride at 2pm, especially as sometimes things are not open when they should be. So I dropped back down to the Creuse and went for the nearby campsite at la Celle-Dunoise, which turned out to be a pleasant little site in a pretty village.

Once the tent was up, I set off for a walk into the village. It was about 4pm and for the first time I really felt the strength of the afternoon sun and the need to be sheltering from it at that time of day. I stuck to the shadows and had a bit of a look around.

A few miles downstream from la Celle-Dunoise, the Grande and Petite Creuse rivers meet at Fresselines. The impressionist painter Claude Monet spent three months in Fresselines in 1889, resulting in twenty-four paintings of the Creuse and surrounding landscapes.
Posted by Hel at 11:05 am