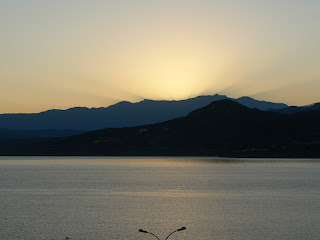 It was barely light when the ferry arrived in L'Ile-Rousse, and I could just make out silhouettes of the numerous mountains that make up the island of Corsica. I didn't fancy riding in the dark, given that my dynamo had turned dodgy, so I stopped in a rocky area between the port and the town and climbed up onto a small outcrop to watch the sun come up. Dawn is a great time to arrive somewhere new, you see everything slowly come to life, and of course you have all day to get your bearings and find somewhere to stay. Rays of sun fanned out from behind one of the distant mountains, the rocks around me glowed a beautiful reddish-orange colour, and suddenly day had arrived and the sun was up in all its dazzling Mediterranean glory.

Ile-Rousse is one of those rare Corsican towns which actually has a French name - the island belonged to Genoa for several centuries and, as a result, most places still have Italian names. The name itself comes from the rocky islets of red porphyry upon which I was sitting.

The coastal road from Ile-Rousse to Calvi is an N-road, I tried to mostly avoid this by taking the inland route via Cateri. The ascents were no harder than any I had encountered in France, up through small villages onto a high pass overlooking the sea. I dropped back down to join the N-road from Lumio onwards, it wasn't a very nice road but didn't last long. 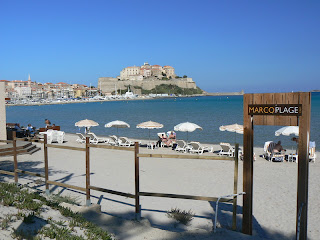 I camped at Calvi, which may or may not have been where Christopher Columbus was born, (nobody really knows for sure). The beach was beautiful, the sand soft and sea a lovely shade of blue, overlooked by the Genoese old town to the north and huge mountains to the south.

I had company at the campsite - whilst I was eating lunch a small cat strolled up, took a seat at the picnic table and started begging for food. I really didn't have much that a cat would like, so I put down a small bowl of water and it seemed happy with that. There were other occupied tents at the campsite - a young couple with a car who kept themselves to themselves, and an older chap who appeared to be a hiker on his own but didn't seem to feel like saying bonjour back to me. I later noticed that he and the cat were quite friendly, maybe he saw the bowl of water and thought I was trying to steal his pet.
Posted by Hel at 10:56 am