I was a bit knackered from Saturday's climbs so on Sunday decided to take in some slightly bigger roads and towns to get in some distance without overdoing it. It made a surprisingly nice change. 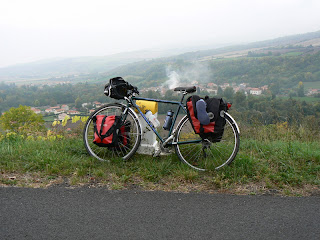 After a climb out of the valley of Champeix and over a small ridge, I dropped into the valley of Couze de Pavin, a small tributary of the Allier river, which eventually feeds into the Loire. I passed through Perrier, which was very pretty but is not where the water comes from. (Volvic, however, comes from the town of Volvic which I didn't visit but is a few miles north of the Puy-de-Dome mountain).

I skirted around the outside of Issoire, which had cycle lanes but the road surfaces were quite badly kept and bumpy. After that I dropped south towards St. Germain-Lembron and crossed over the Allier into the Haute-Loire departement, which is where many of the Loire's tributaries start out.

I arrived in St. Florine at precisely mid-day and was greeted by air-raid sirens. At the time I thought maybe it was some kind of war remembrance type thing, but apparently these things are still in use, tested on Wednesdays and used in all types of emergencies. Given that it wasn't a Wednesday maybe I should have gone indoors and listened to the radio for further instructions. Alternatively it may have been a "Warning: smelly cyclist descending upon the town" siren. You can't rule that out. 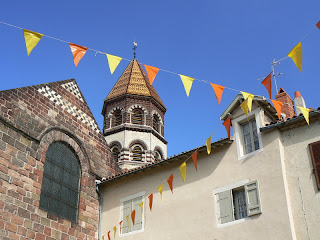 After that I headed to Brioude. It was still lunchtime when I got there, so everything was incredibly quiet and, although it was not a small town, the streets were virtually empty. I ate lunch in a deserted square adjacent to the fabulous basilica, and munched on bread and cheese while gazing up at its intricately decorated roof and watching flocks of pigeons swooping and roosting around the bell tower.

It was still hot so I took my time over leaving Brioude, riding slowly through shady mediaeval streets and alleys, under a stone arch and past the half timbered "Maison de Mandrin", a former tobacco warehouse which in 1745 was robbed by the renowned smuggler Mandrin.

Vieille Brioude, as the name suggests, was older-looking than Brioude. It was a good deal smaller, the buildings were a lot more simple and rather crumbly, and it didn't hold the same mediaeval charm as the larger town. 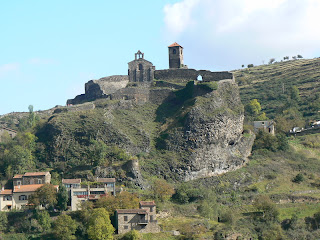 I spent all afternoon on the Allier gorge, which was lovely, green and cliffy. At St. Ilpize, I passed the ruins of a mediaeval chateau perched high above the river on a rocky platform, overshadowing the town below. Further down, I stopped at Lavoute-Chilhac to fill up on water, and was afforded lovely views up and down the river.

I camped at Langeac that night, and was pleased not to be too exhausted!
Posted by Hel at 10:32 am

Hi just a note to say how good this blog is

Hi just a note to say how much i am enjoying this blog.

I am loving this blog too - I would like to put it on my site meandmybicycle.com, a social network for cyclists! In fact I am goign to make it a featured blog next week :)

Thanks! Congratulations on your site, it's looking great and you seem to have a growing community. I'd be honoured for this to be a featured blog :-) I have signed up and look forward to participating in the site!

Hi there, just wanted to say I'm enjoying it too. Nicely done - a gentle journey across France. I must do this one day. I get too obsessed with racing, but touring must be great too!

Well, I've done a bit of organized touring. A bit full-on though... http://www.geocities.com/exguardianreader/rp2001/index.htm

Thanks for your posts, I'm glad you're enjoying reading! I have bookmarked your page and look forward to reading it later. I've never tried organised touring, maybe I will one day but for now am happy with the spontaneous and sometimes rather random nature of independent travel! You should definitely try it. :-)