If I had to do any section of the trip again, it would be the Ardeche Gorges.

Unlike some of the more spontaneous sightseeing, I had planned to visit the Gorges from the outset, and over the last few days had been making sure my route was aimed towards the northern end.

The TV weather forecast told me it would be rainy on Wednesday, and I wasn't impressed, as I'd been hoping for good weather along the Gorges. Fortunately, the rain held out until the evening and the day was quite sunny with only a little cloud.

A couple of miles before Vallon Pont d'Arc, I noticed what could only be a disembodied fox tail at the side of the road. Not really wanting to know the story there, I carried on. Unfortunately, a mile or two later I encountered a disemtailed fox body. I wanted to know even less. 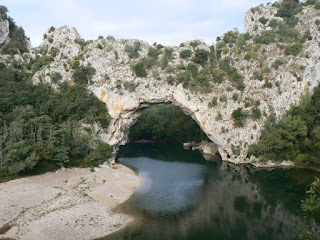 The gorges were more stunning than I could have imagined, and harder too.

The hardest bit was climbing the Serre de Tourre, a double-arrow (9-13%) on the map, nothing out of the ordinary by English standards, but the ascent was much longer than the map suggested. I met a fellow cyclist at the top, unladen on a mountain bike, and saw him at various points throughout the ride. It is a long road with few junctions, and frequent stop-off / look-out points, and I found myself playing tag with various travellers, both motorised and non-motorised, seeing them over and over along the length of the journey.

The best parts were Pont d'Arc and the stunning views from Belvederes de la Haute Corniche.

Pont d'Arc is a natural arch carved through the rock by the force of the river straightening itself out If you remember oxbow lake formation from school geography lessons, it's like that but the lake part has been drained and is now covered in vineyards). Belvederes de la Haute Corniche, many miles further downstream, is a set of high viewpoints over a deep bend in the river.

St. Martin was the first town after the gorges. I stopped at the first restaurant I saw and ordered a salade nicoise for lunch. Next thing I knew I had been swept up in a conversation with the people on the next table, and was actually speaking and understanding French to a greater extent than "une carafe d'eau, s'il vous plait" or "avez vous une chambre pour ce soir?". It was pretty cool, and probably down to a combination of them speaking nice and slowly and clearly for the English person, and my ears having got a bit more tuned in to the language. 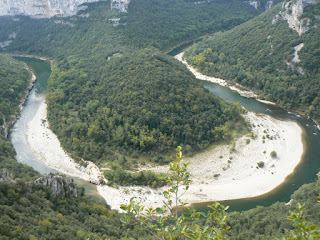 They were a middle-aged couple from Toulon, on holiday in the area. Again, I think they were quite frequent visitors. I told them about my journey and for the first time somebody was more surprised at the distance I'd covered than that which I intended to do. Marseille wasn't far now, they assured me, and were so impressed with my pedalling efforts that they insisted on paying for my lunch. They recommended that I visit Avignon, and mentioned that Corsica was very mountainous, "harder than the Alps" apparently. I said that maybe I'd just sit around and eat ice cream once I got to Corsica. The waitress brought out a leaflet detailing all the exciting sights to see in Provence, and this would prove useful in days to come.

I camped in St. Martin, again another ghost town and very hard ground on which to pitch a tent. That evening I came up with my greatest invention yet (there haven't been many), the Buff Head-torch. Getting tired of holding my mini-torch (it is only about 1cm diameter) in my hand or between my teeth when reading, I came up with a new function for my multifunctional head garment, placing it around my head Rambo-style and tucking the torch up against my forehead. I found it was possible to angle the torch so it was always pointing at where I was looking. Looked silly but worked great.
Posted by Hel at 11:13 am

This is much better than working!