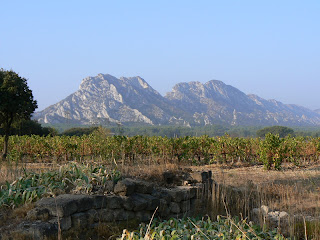 Going south from St. Remy, there were some lovely views of the Alpilles, a small mountain range.

I started to cross the mountains. I wasn't having the best of days, despite having taken a day off. It felt like I'd accidentally hitched up to somebody's caravan when I left the campsite. There were fewer cars and I was passed by a lot of cyclists on skinny road bikes. I politely said bonjour to each and every one but really wished they'd all go away and leave me the road to myself - I was missing the space and emptier roads of earlier regions. 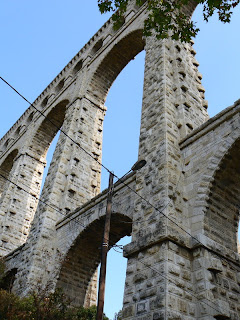 Near Aix-en-Provence I was pleasantly surprised to find another fabulous aqueduct, the Aqueduc de Roquefavour. It was bigger than the Pont-du-Gard and much newer (mid-19th century) and very impressive, although the setting was not as nice.

Shortly thereafter, I rode under the TGV Mediterranean line which would be carrying me home in a week's time.

Close to Calas, I was approached by an elderly cyclist in lycra, who talked incomprehensibly at me and tried to ride two abreast with me on a busy narrow road whilst swerving violently and being honked at by cars. I managed to pedal sufficiently slowly that I eventually lost him.

I found hell at Plan-de-Campagne, a huge business park just outside Marseille, which is apparently where all the French go on their Sunday afternoons. It was absolutely jammed up with traffic, English-style, at a huge intersection of motorways, other large roads and roundabouts. I had just navigated my way through a couple of junctions and was headed towards the road to Septemes-les-Vallons, when I looked over my shoulder and perceived the twin shining beacons of Formule 1 and Buffalo Grill. Wanting to stay somewhere cheap and not get too far into the city, this was exactly what I was looking for.

I didn't want to figure my way back around the labyrinth of junctions so I dismounted and headed as-the-crow-flies straight for it across roads and verges, before I realised I would have to cross a motorway with a small wall on the opposite side, and goodness-knows-what on the other side of the wall... not such a great idea after all. I headed back down to the road and spent about ten minutes trying to join the constant stream of traffic - there may have been some shouting at traffic, most of it unrepeatable yet also highly original.

I found my way into the hotel, dumped everything in the room and headed straight for the restaurant where I stuffed myself silly on a huge burger. Back in the room I flopped on the bed and watched lots of TV, including the American Office dubbed into French (it's much less irritating that way) and footage of French people crying after Saturday's Rugby World Cup defeat by the English. It had been one of those days when even Formule 1 can feel like luxury!
Posted by Hel at 11:23 am