After a brief phone conversation with Dgym on Thursday night (it was brief due to lack of phone battery due to lack of sun) I put my head down shortly before dark, and promptly became concerned for my sleep given that (a) I'd gone and parked my tent right under a street light and the tent was filled with orange glow, (b) I could hear lots of people-noise in the street and (c) I could hear lots of yippy dogs yipping away. I got a couple of hours' disturbed sleep and then at 10pm the light went out and everything quietened down, even the dogs (after all, this wasn't Portugal!) and I slept pretty well until the light came back on at 6am. 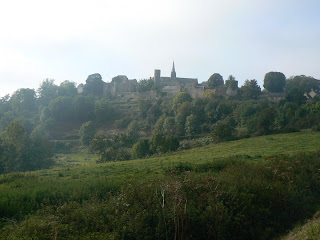 I got up, cooked porridge, packed the tent away and rode off into a lovely orange sunrise. I ate a pain au chocolat for dgym and a choc chip brioche for me at Montsurs. I passed through Bois des Vallons and then the pretty mediaeval fortified town of St. Suzanne, before heading off down the scenic and slightly indirect route through the Foret de la Grande Charnie, and into the Sarthe departement.

Once out of the forest, I passed many of fields of forlorn-looking sunflowers, some blackened, dried out and dropping, others already beheaded. I saw cute little baby cows (fortunately not too jumpy), an unfortunate number of flattened hedgehogs and plenty of flattened chestnut shells (which looked a little bit like the hedgehogs, only smaller and less distressing). A tiny lizard kept me company at lunchtime by occasionally popping out of a crack in the rock which I was sitting next to. 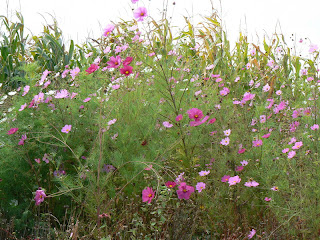 Malicorne-sur-Sarthe. This was when my phone started playing up - my international SIM card lost its ability to find a network and I was unable to talk to dgym that night. (It didn't work again for the rest of the trip. I later found out that the SIM provider had gone under, and Story Telecom had decided not to let me know about this until they sent me a letter in early October)
Posted by Hel at 10:31 am