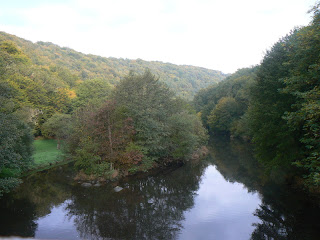 Dinner clearly wasn't enough, as I woke up very hungry at 2am, and had to munch on the last of the ginger oat biscuits to silence my complaining stomach before I was able to fall asleep again. I was woken at various points in the night by nearby horses making funny little horsey sighing noises (brrrr!). Conveniently, just enough rain fell in the night to make the tent nice and wet and heavy the next morning when I packed up. Nobody had come round to take payment for the campsite, so I slipped 5euro under the reception door as I left.

I started out by taking the wrong road out of la Celle Dunoise, which was at least in vaguely the right direction, but later on I took another wrong turn back onto the originally intended road. Sometimes these mistakes are worth making, as I ended up on a fantastic descent into a beautiful gorge near le Bourg d'Hem, which was the best bit of the day. There were quite a few ups and downs throughout the day, and my legs handled it quite well.

I was running low on supplies. I needed toilet roll, stove fuel and various food items, but the villages I passed through were too small to have shops. I finally reached Chenerailles, a reasonably sized town, at about 1pm when the sun was getting a bit too strong for my liking. The town had two supermarkets, both of which were closed until 2:30, despite one of them being called "8 a huit"! I decided to wait around for a bit. I ate lunch in quiet shadows by the church. I tried to call dgym, who wasn't around, then tried to phone the campsite about 30 miles down the road at Merinchal to find out whether it was open, but nobody answered. I got impatient, waited some more and decided perhaps it was pushing it to get to Merinchal now, especially given the terrain and heat. 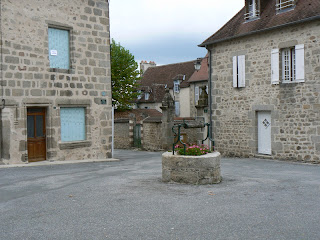 I asked around at hotels - one wanted 48euro for a room which is a bit much for one person, and the other didn't have anything available. I waited some more, and then noticed a chambre d'hotes on the street near the (still closed) supermarket. The information in the window mentioned that they did evening meals too and the owner had worked in top restaurants in London, so I was hopeful of a good feed and some English-speaking. I knocked on the door and after a brief conversation in awkward French about whether there was a room (which there was), the bloke said something like "righty ho then", I said "You're English!" "Yes..." "Me too". "Well, that makes things a bit easier!". I had my pick of the rooms, and chose the nice quiet one facing away from the street, Villemonteix, with its wonderful hip-bath.

I took a wander around Chenerailles that afternoon, which was quite nice in the Old Town area around the church, with fantastic little medieval streets and houses which look like they haven't changed in centuries. 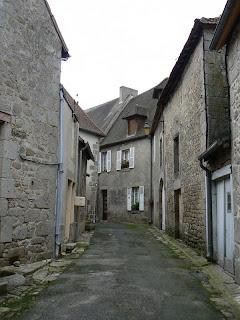 It was lovely to have a big soft bed, although the hot bath and meal were appreciated a whole lot more. I was served a wonderful meal that evening, in the company of Margaret, mother of Frances who co-owns the B&B with her husband George. Tomato, mozzarella and avocado salad, followed by roast chicken with vast quantities of trimmings (I really wasn't expecting to get a roast any time soon!) then cheeses, and ice cream for dessert, all accompanied by copious quantities of wine.

It was really nice to have some company for a change. Frances and George bought the house a couple of years ago, spent some time doing it up, and opened the B&B in June 2007. They seemed to have had quite a successful summer with it, and had done a really nice job of renovating. They seemed to have had lots of interesting visitors, and I wasn't the first cyclist to visit, they'd had another Channel - Med rider, and one going from Holland to Spain. Margaret was just visiting for a couple of weeks, but was giving some consideration to moving out there from her home in Norfolk. Frances said that the only thing that she missed about the UK was the variety of food you get in big supermarkets in the UK (Indian spices, etc). Most of the family have already emigrated to other countries, so she has very little reason to go back, and would rather just stay in France and integrate with the local community.

They're working hard at this - learning the language, contributing to the economy, trying to do everything "by the book" business-wise, and their efforts have mostly been well-received. There was some hesitance until locals realised they were making a permanent move, and not just setting up a holiday home which would be empty half the year, but people have been very welcoming. There was one exception - that same day, they had been to the Mairie to sort out something business-related, and were confronted by a very bigoted woman who was rude and unhelpful and generally disparaging towards "you English" who come over, ruin everything and cause lots of problems. Hopefully this was just an isolated incident, and won't discourage them.

I slept very well that night and had an excellent stay. Frances and George were great hosts, and I wish them all the best with their business.
Posted by Hel at 11:30 am