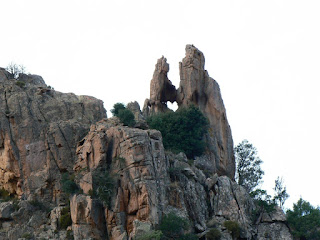 The climb from Porto to Piana was one of the hardest of the trip, seven miles of up, rising from sea level to 443m. I left behind views of Porto and its bay, and passed through the alien red rocky landscape of the Calanche, featuring Tête de Chien (a large rock which from the right angle looks like a dog's head), les Roches bleues (not actually blue, just less red than the others) and the Heart, a heart-shaped hole in the rocks.

After Piana, there was a little more uphill and then a lovely flying descent for a few miles. After that were a couple of short but tough uphills to Cargese - it was rather hot, and the scenery wasn't that interesting.

I was just about ready to stop, and everything seemed to be telling me it was time to. At some point in the last couple of days my raincoat had mysteriously vanished - I thought it would be impossible to lose things when camping, and clearly I was wrong. My torch had broken the previous night. My front hub was making some very dodgy noises, which had grown more persistent over the last few days. It sounded like worn bearings, but there wasn't much I could do. At least I think it was my hub making the noises, it could have been my knees, which were feeling a little dodgy too.

Friday was to be the last night before beginning my journey home, and I probably smelled bad, so decided to get a hotel and take the opportunity to freshen up and relax a bit. My room was very nice until I noticed a long procession of tiny ants marching from a hole in the wall behind the light, all the way along the top of the headboard and over to the other side. In what must have been the highlight of my French-speaking career, I went to the hotel front desk and announced "Excusez-moi, il y a beaucoup de fourmis dans ma chambre!". The lady on reception seemed as horrified as I was at the idea of beaucoup de fourmis parading across my bed and was very quick to give me a new room, ant-free. 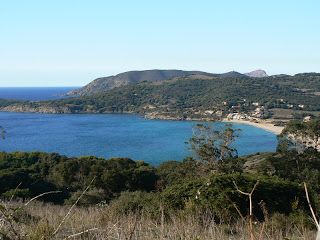 Dinner was very nice, I went for the fisherman's menu which was the world's hugest seafood salad followed by monkfish. I was seated next to a pair of marine researchers, both Corsican in origin but living in the south of France, and behind me was a table of their American colleagues, clearly marine research is a popular activity in the area. They reckoned I'd chosen the best bit of Corsica to cycle through, although the Bastia peninsula is also nice.

They also informed me that tomorrow it was likely to rain. Apparently it had only rained for one day in the last six months, so the Corsicans were rather looking forward to this. I wasn't so keen, having lost my raincoat. They also said that I had been lucky with the weather as it is normally colder at that time of year... but the island was due its first snows tomorrow, above 1200m.

Back in the room I could hear lots of rugby-watching noises, so I tuned in in time to see France in the middle of losing quite heavily (it was the match that decides third place between the people that lost the semi-finals, I don't know what you call it!) I dozed off at half time and awoke to see lots of French rugby players crying on each others shoulders, surrounded by grinning Argentinians.
Posted by Hel at 3:57 pm