At 7:30am, the Pont du Gard was deserted and bathed in golden sunrise light. The occasional walker or jogger went by but apart from that I had a Roman aqueduct to myself for an hour.

I consulted my leaflet as to where to go next and decided upon the Abbaye de Saint-Roman, the remains of a 5th-century troglodytic abbey. It was quite a long climb up to the abbey site, at which I found that the abbey itself wouldn't open for another three hours. I decided to walk up to the hermitage instead, since that can be visited at any time. I bumped into a group of joggers, one of whom recommended riding my bike up the hill as it would be easier. He obviously hadn't taken into account the difficulties of riding a fully loaded touring bike up cobbles, steps and gravel paths! I locked up at the first opportunity and walked the rest of the way. 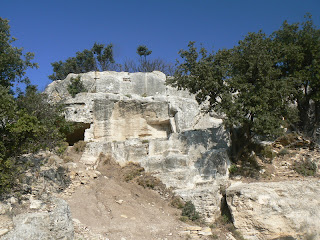 The hermitage was pretty cool, a set of rocky caverns and tunnels at the very top of the hill, inhabited by a couple of hermit goats, and with marvellous views over the river Rhone and the surrounding countryside.

I came back down, crossed the Rhone and entered Bouche-du-Rhone. I was finally in the same departement as Marseille!

I stopped at the Intermarche in St. Etienne and came away weighed down with herrings, cheese, olives, snacky cakes, dried fruit, rice, etc. The road to St. Remy de Provence was horrible but fortunately there was a separate cycle path for most of the way, upon which I stopped for lunch and overdosed on herrings. After that, I didn't feel like going far so stopped in St. Remy at a well-equipped campsite populated mostly by Dutch caravanners. Once again, the ground was incredibly hard to pitch onto.
Posted by Hel at 10:22 am