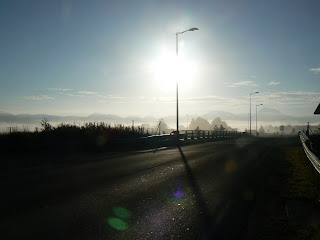 I was going to take on the Puy-de-Dôme today. Awoken by church bells at 7, I was gone by 8:30, descending into Pontgibaud with the mountains now visible on the horizon. I made another attempt to get campsite information, only to find that the tourist office had, in the finest of French traditions, decided to close for the day.

I followed the small roads out of Pontgibaud, ascending the Col de Ceyssat which was beautiful and autumny with lovely views of the approaching mountain, but was also long and hard, taking me to 1078m. A creperie stood at the top, which is a fine place to build a creperie, but foolishly I decided not to stop. The Puy-de-Dôme ascends to a height of 1465m, and the top of the col was right next to the mountain so I felt I was part-way up already... unfortunately it's never quite that easy, as the road then dropped down again quite a long way before reaching the foot of the summit.

So, who won the match of me versus the volcano? Well, nobody really. The volcano simply wasn't man enough to take me on. At the entrance to the toll road was a sign prohibiting pedestrians, bicycles and horse riders except within certain hours during the summer months. I was a little disappointed that you can drive up there, jump out of the car to take a picture and claim to have climbed the Puy-de-Dôme but for most of the year it is not possible to do that on a bike... 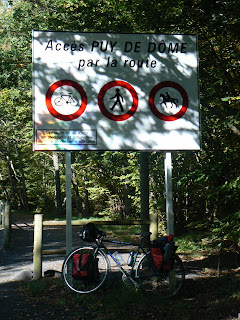 I won't pretend there wasn't a part of me that was a little relieved. It did look particularly big and steep by the time I got to the foot, and would have been a tough climb.

Un peu deçu, I turned away and continued south east, past the city of Clermont-Ferrand. I saw lots of other cyclists, but not a pannier between them - well, unless you count the bloke who was struggling along in the heat on a mountainbike with a huge rucksack on his back.

Just before the village of Nadaillat, an oncoming guy on a racer warned me about "un chien mechant" (a nasty dog) ahead. Always appreciative of such warnings, I passed through the village with caution, checking each driveway in turn until I saw a large fierce-looking dog standing in a driveway. It barked a bit, but seemed to be tied up.

I'm not quite sure why I followed the road to "Gorges de la Monne", maybe I just like gorges, but this route went up and up and up to Olloix, a gruelling climb in searing mid-day heat. I stopped in every shadow I could find, cursing myself for following that sign. At Olloix I had a quick look around for places to stay, eat or buy food, but there didn't seem to be much and main street was so steep I gave up about half way, turned back and coasted 9km downhill to Champeix.

I found a lovely hotel/restaurant/creperie at Champeix, where I decided to stay for the night. Chocolate crepes were followed by cheesy hammy eggy crepes (mmmm) for a nice mid-afternoon snack. I had a look around the town, found a cybercafe and spent an hour furiously scribbling lists of campsites!
Posted by Hel at 10:48 am