The campsite was just off the A30 and we live just off the A30. What better way to spend a Sunday than on a nice straight road home with no navigational worries and the sweet breeze from a speeding car whooshing past your elbow every couple of seconds... well, it made sense in dgym's head anyway. I managed to talk him out of taking the main road all the way home and we just did a section of it, but that was bad enough, roads like that are no fun and my legs weren't at all happy with me by the time we got onto the little roads again. The way back was quite hard work, we seemed to end up choosing the hilly route nearly all the way back - the hills weren't quite enough to be marked with arrows on our map, and we ended up wishing for a nice OS contour map! 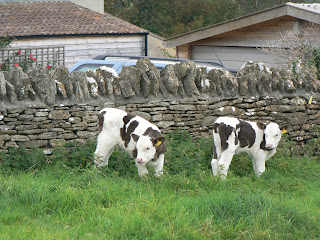 It was just before Lillington that we found what must be the teensiest tiniest little cows in the world. We weren't sure they were real at first, as we didn't know you could get cows that little but then they started munching on grass and scampering around. It's a shame we didn't have room in our panniers to take them home with us!

It's nice cycling home, you can cycle for much longer and relax as you don't have to worry about where you're going to stay, unless you accidentally dropped your keys down a drain or something. Dgym beat me home as he was less knackered than me. It was quite weird coming back into the house after a week under canvas, but good to be home!

We had originally intended to spend two weeks cycling all the way to Cornwall and back, maybe, well, we'd see how far we got. It turns out that didn't work so well for us in terms of motivation. Without a fixed destination to aim for, and having to make it back as well, with miles and miles of monster Sidmouth-like hills everywhere we turned and the scenery, while pleasant, not stunning enough to justify the level of hillage, we kind of ground to a halt at Ladram bay and headed back home after that.

With still a week to spare before I was due to set off to France, and a couple of leaflets I had picked up at the campsite, we formed a new plan, which I am ashamed to say involved un-hippily driving back down to the South Devon region to spend a few days visiting various animal attractions in the area:

1. The Donkey Sanctuary - donkeys are lovely and it was nice to see so many of them. Free to get in and has a little maze and some nice walks.

2. Prickly Ball Hedgehog Hospital - probably the coolest of all the places we visited, as they have "Meet a hedgehog" sessions where you are formally introduced to a couple of their hedgehogs, the story of each hedgehog is told as it's shown around the room and you get to stroke it, which isn't as painful as you'd think. 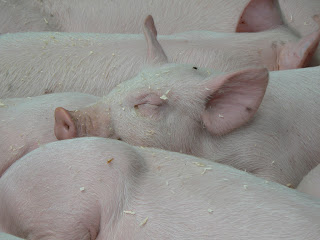 3. Crealy Adventure Park - has a cool farm with lots of bunnies, chipmunks, happy little sleepy piglets and a huge goat who wants to be your best mate. There's also a death slide, which dgym went down (after much perching on the edge and working up the nerve to jump off) and I politely declined, a couple of long but incredibly slow slides, and a rather unexciting rollercoaster, in which they make you go round twice in the hope that maybe you'll be more terrified the second time. Quite frankly, after the insane white-knuckle experience of being driven along precarious mountain passes by a Portuguese driver who could barely see over the steering wheel and didn't seem entirely convinced of which side of the road you drive on there, most rollercoasters pale in comparison these days...

4. Otter Sanctuary & Butterfly Farm - go and get your glasses / camera lens steamed up in the butterfly house and meet some cool butterflies and hummingbirds, or go outside and see the otters being fed.

All this took a couple of days, during which we also made it to Exeter to catch up with Paul & Helen, have some dinner and see their lovely new house, it was good to see them again. We then we headed home with still a few days left for me to get ready for France.