This was the day of uphill - I started at about 500m and reached a maximum of 1330m near the end of the day, with lots of ups and downs in between. Mostly ups. 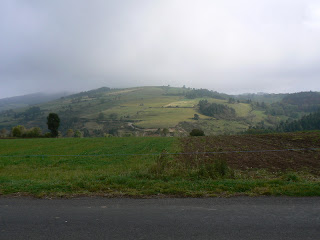 After a couple of days of more interesting and rocky landscapes, today was a return to farmland, which was pleasant enough but nothing special. If it had been a nicer day, it may have been easier to appreciate the far-reaching views on the climb out of Langeac, but as it was it was too cloudy, hazy and dull a day to get much out of it.

I passed through lots of very small, shabby and quite poor-looking villages and small towns. It was Monday, so nothing was open and I failed to acquire my daily pain au chocolat. I ran out of "snacky cakes" (biscuits, cakes, etc that I munch on for energy) and started to get a bit hungry. At Bains I found an open "restaurant" with a very limited menu and had a horrible slimy croque monsieur, which at least kept my belly quiet for a couple of hours. It was a bit like being in Spain but with no grocery shops open.

I finally found a 8-a-huit at Landos, which of course didn't live up to its name but was due to open in fifteen minutes time. I waited around and called dgym to kill some time. I wanted to go to the toilet but refrained from using the public WC as it was dark, cobwebby and smelled rather horrible. I don't normally mind French public toilets but this one looked and smelled bad. When the 8 a huit opened I spent a good half hour delighting in the joys of an open grocery shop and stocking up on chocolate bars, jaffa cakes, fruit and dinner items. 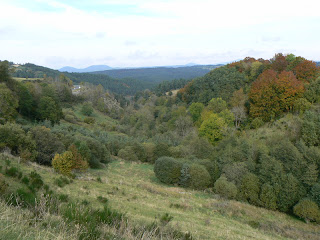 I carried on to St. Paul de Tartas where supposedly a campsite was open, but found no sign of a campsite even existing. It was getting late in the day, so not wanting to waste any time, I turned back and headed for the other option, Lavillatte.

I crossed into the Ardeche department, and things started to get lovely again. Pine forests led me up to an altitude of 1330m and then onto the N102 (there wasn't much choice of roads). I turned off the main road a couple of miles later and as the sun got lower in the sky, a lovely little foresty hairpin descent led me down through Lavillatte and to the campsite, which was next to the Espezonnette river (again, a distant tributary of the Loire).

With little time to spare before dark, I tapped into my magic multitasking powers and discovered that, conveniently, putting up the tent and boiling a pan of water take about the same amount of time.

It was a cold night (I estimated I was still at at least 1100m) and, despite there being many caravans on the site, there was no sign of life from any of them.
Posted by Hel at 12:16 pm