Somewhere along the line since our last trip to France, I had managed to completely forget something about the French - they like to close things on Mondays even more than they enjoy closing them on Sundays. Somehow I had not noticed this last Monday when I arrived, probably because I arrived into a big town, stopped at a big supermarket and didn't pay attention to much else.

At Azay-le-Rideau I was kept awake, on and off, until midnight. There was a concert going on in the nearby stadium (campings municipales are often located next to sports grounds) and a couple decided to set up their tent nearby and giggle and chat until late. I could hear bunnies munching grass outside the tent, or so I thought at the time, it may just have been the cats that I caught trying to get into my rubbish bag early the next morning.

Apparently, I left just after dawn - it was one of those grey days when it's hard to tell when sunrise actually happened, and the sun didn't actually make an appearance until about 10:30. After that, the weather got quite muggy. 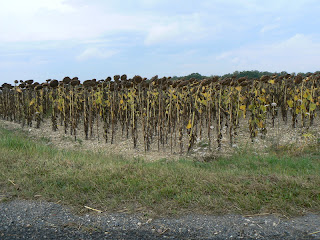 The landscapes just south of the Loire were not very exciting - long, gently winding roads through farmland, freshly-ploughed or wild-growing fields. I passed more sunflowers and grape vines, and a huge plantation of apple trees in the afternoon.

I passed through the town of Descartes, which was previously known as La Haye en Touraine until 1802 when it was renamed in honour of its most famous son, the philosopher Rene Descartes.

Having run out of campsite information, I visited the tourist office at le Grande-Pressigny to find out which sites were still open. Since I was headed into a different departement (Indre), they were lacking in useful information so let me use their internet point to find out. I noted down a few, and decided to head for Mezieres-en-Brenne.

At Martizay, it started to rain quite hard. I sheltered in a bus stop for a while but the rain showed no sign of easing off. I dashed across to a nearby boulangerie to pick up some bread, a coffee eclair and some kind of savoury potato pastry. The lady behind the counter suggested a couple of better places nearby to shelter but by that point I was bored with waiting around and decided to keep going.

At Mezieres-en-Brenne, I couldn't find the Bellebouche park on which the campsite was located. I considered getting a hotel but one was closed down permanently and up for sale, the other was closed because it was the French peoples' favourite day of the week, Monday. I found an open supermarket, picked up some supplies and asked for directions to Bellebouche. They told me it was 7-8km away so I carried on down the road. 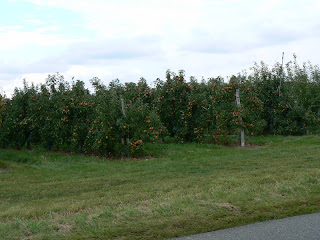 I arrived at Bellebouche holiday park about half an hour later, soaked to the skin with a hefty 70 miles on my cycle computer .

"Vous etes mouillée!" (You're wet), observed the well-spoken young lady on reception, before informing me that, whereas the campsite was closed for winter, they had gites available for a reasonable price. I was tired and wet and happy to take whatever I was given, which was pretty small and basic by most peoples' standards, but to me at that point it was the height of luxury to be able to shower off all the road grime and numerous flies that had fallen down my top, stuck to me and died during the course of the day, not to mention being able to spread my maps out on the kitchen table and examine routes under a good light without having to worry about impending darkness.

Before it got dark, I unloaded my bike and rode a few miles to nearby Vendoeuvres to call dgym from the phone box. I got back and cooked myself a rather horrible dinner consisting of pasta, shallots and peppers.
Posted by Hel at 11:01 am