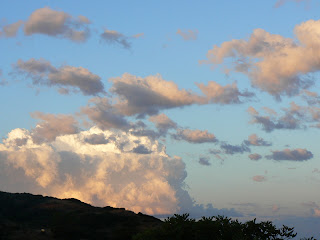 As promised, the weather took a turn for the worse. The sky was still blue when I left, but it was distinctly colder than it had been, and dark clouds were in the distance. Convinced it was going to rain, and no longer having any waterproof clothing, I pedalled harder than usual.

The road clung tightly to the coast, and was quite flat between Cargese and Tiuccia. As I began the climb up to Col de S. Bastiano, the sky darkened and I felt a couple of drops of rain. Dark clouds cast their shadows upon the sea. As I neared the top of the col, past Calcatoggio, thunder rumbled around me. It's not the best of ideas to be out on a bike in a thunderstorm but I was in the middle of nowhere with no shelter in sight, and had very little choice other than to go back the way I came, or carry on.

I reached the top and began the descent, flying down the mountain as fast as I could, bolts of lightning flashing on the horizon, and found my shelter at a small bar on Col de Listincone where I ordered a coffee in which to dunk my pain au chocolat. The storm died down and I carried on downhill to my journey's end at Ajaccio.

Ajaccio is quite big and it was a long way into the town centre. Fortunately, unlike Marseille, there were signs to the centre right from the start so I didn't get lost, however there were plenty of steep ups and downs, which in a way was quite nice as I'd faced very few hills of real gradient and it was nice to power up the hills and see what exciting new muscles I had developed. 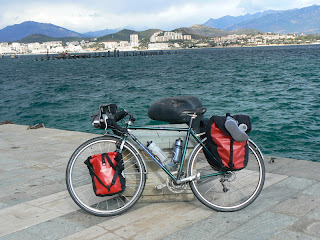 I stopped for a crepe au citron at the first place I saw. The lady in the cafe was shocked that I'd been cycling out in the "rain". Despite all the thunder, approximately five drops of rain had actually fallen on me that morning. Some people need to visit Northern Europe and find out what rain is really all about. I spent the next couple of hours browsing souvenir shops, picking up gifts and various Corsican goodies, having previously cleared out my food pannier to make room for such delights.

I had a glace au citron (can you detect a citronny theme here? I like lemons.) as the rain started to fall again, and it was so cold that my icecream didn't melt properly into its cone. I'd have liked to look around Ajaccio a bit more, but it was so cold and windy and horrible, I sheltered in a phone box chatting to dgym until he was fed up with talking to me, then headed to the ferry port.

I ended up on the Monte Cinto again, the same boat I'd taken on the journey out, and the crew were clearly not expecting to be picking up the lady with the bicycle who they'd dropped off five days earlier 120 miles up the coast. I resisted the urge to taunt them about their country's further rugby losses.

The crossing was surprisingly rough for the Mediterranean and I was kept awake most of the night by things banging around, most of which I was convinced was my bicycle breaking free and rolling around on the car deck.
Posted by Hel at 11:40 am