It was the last day. Apart from a couple of short trips across town, the cycling was over and I just had to get back to the north coast.

As I arrived in the breakfast room of the Monte Cinto, one of the crew took me aside and gently broke it to me that England had lost the rugby final last night. I couldn't really give a stuff about rugby but played along and feigned disappointment.

Once in Marseille, it was easy to find St. Charles station, and I set about dismantling the bike. I succeeded in turning the handlebars, which had been the greatest source of concern, but was unable to detach the pedals. I'd learned that my pedals could be detached with a 6mm allen key instead of a huge pedal spanner so had just brought the allen key, unfortunately I couldn't get enough leverage. It turned out not to matter too much as, once I'd put the wheels on either side of the frame, the pedals didn't stick out so much.

I felt like some kind of street performer, passers by occasionally stopping by to observe my struggles, it would have been nice if they'd gone the whole hog and thrown me some spare change. In my flustered state, I spent several minutes trying to remove the rear wheel before realising the brake was still connected. The front rack was as much of a pain as it had been on the trial run. The side that hadn't snapped last time, just wouldn't come off this time, but I was able to rotate it so it didn't stick out, and tie it in place with string. 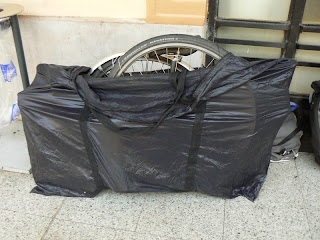 The bike only just fit into the housse - if I wasn't going to be reassembling it to ride across Paris, I would have removed the rear rack too. It was a triumphant moment when the bag finally zipped up, and I quickly set about rearranging my baggage, managing to fit one front pannier and its contents into one of the rear ones and making sure all my valuable / breakable stuff was in the handlebar bag and other front pannier. No sooner had I'd finished repacking, than my train's platform was announced. Unable to find a luggage trolley, I wore the two smaller bags across my body, picked up the two rear bags in one hand and hooked the bike bag over the opposite shoulder, grabbing the frame on the inside so I could lift. I could just about shuffle along like that. Fortunately a nice lady helped me to carry the rear pannier, compost my ticket and find the right carriage.

I wasn't the only person on the train with big luggage, there was also a Kiwi bloke with a very compact one-man sailing boat neatly packed away into two cases. There were already lots of bags on the racks so we both placed our respective sporting equipment in the corridors. Later on, the train staff came along and found us both some luggage space.

The TGV was a train of great speed. It was fast, clean, on time, and after stopping at Aix-en-Provence early on in the journey, it made the rest of the way without break. It was like watching my long bike journey on a fast rewind - not exactly, as the TGV takes a different (and flatter) route, but we passed the Aqueduct de Roquefavour, the Provence countryside, the distant Ardeche cliffs and the massifness of the Massif Central.

We arrived in Paris on time. It didn't take long to reassemble the bike, and onto the back rack I affixed two rear panniers, with one front pannier and a rear mudguard strapped on top. The bike was horrible to handle like that, but I didn't have to go far. I quickly found the cycle routes - as I had been told, there are lots of bicycles around Paris these days, but it's still no Copenhagen or Amsterdam. I followed the cycle route along the Seine, but managed to lose it at some point and ended up bumping along the cobbled river banks and dragging the bike up steps, unfortunately this being Paris, people strolled blissfully by without offering help. I eventually found a ramp that took me back to the road, and made my way to Gare St. Lazare. 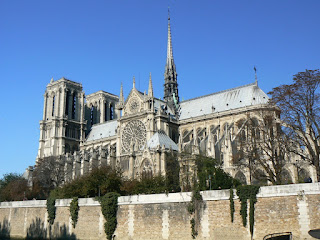 It really wasn't a great way to see Paris, and maybe I should just have taken a taxi across town. It was clearly a beautiful city - I passed by Notre Dame and the Louvre, and saw the Eiffel tower in the distance, and I would like to visit properly some time, but on that day it felt like I was in another London, and not in a good way. I was missing the France where people say bonjour back to you, and offer to help with a heavy bike.

When I reached Gare St Lazare, there wasn't much time left, so perhaps it was for the best that, due to strikes, my train had been cancelled and the next one would leave in three hours time - although at the time I didn't exactly feel that way. Waiting around at St. Lazare was not fun, there were redevelopment works going on and they can only be an improvement. It smelled of wee in places, not surprising when you have to pay 50c to use the loos, there's a big queue and the lady manning the toilets is a miserable cow. She kept me waiting ages as she counted out a big pile of 50c coins. I paid with a 1euro piece, which she insisted I place on the counter rather than hand directly to her, and then gave me a bunch of coppers as change, despite clearly having lots of 50's available.

I packed away my bike, sat down on the cold floor and munched on a chicken sandwich, waiting for the next train.

When the train arrived, two fellow passengers offered to help with my baggage, and the assistance was gratefully received. We found a luggage space occupied by a young chap and his (unbagged) bicycle, and we all piled on. The train rapidly became jam-packed with people and bags, and I found myself squatting in a corner beside the young lady who had helped carry my bags, an electronics student from Caen who had been visiting her sister in Paris. "C'est toujours comme ca en Angleterre", I told my fellow sardine-passengers. My bike had become part of a huge tower of luggage. It had stuff on top of it, all around it, poking into the already stretched fabric of the housse, which was undergoing strains I hadn't anticipated... but it held out fantastically well.

Hordes of people got on and off at every station, the luggage pile getting no smaller until after Caen, when I was finally able to stretch my legs again.

I spent the last couple of stops chatting to a Mexican girl called Monica, who was going to Carentan for work - she had just flown in, and not slept for about 30 hours. She spoke English but not a word of French and said she found the language difficult and was worried because she'd heard the French weren't very friendly. I told her she had nothing to worry about there. On the topic of yummy Mexican food, she said she wasn't really into spicy stuff. She was probably in the right place... neither are the French. The train dropped her off at Carentan, and we carried on to Valognes.

At Valognes I found a dgym, who took me to Reville where my family were staying in a gite, and fortunately some dinner had been saved for me.
Posted by Hel at 10:51 am