I've been back from France a while now. My family and I spent a nice week in Normandy before returning to England, and everyday life has been resumed.

It's always a little bit hard coming back from a tour, it's nice to see everybody but nothing is quite as exciting as being out on the road, riding through beautiful scenery, seeing somewhere new every day, living out of a few bags, and getting bucketloads of fresh air and exercise. The pain-au-chocolat withdrawal didn't make it any easier, I was hoping to wean myself off them during the week in Normandy but they are just so tasty I couldn't help it, and had to go cold turkey upon arriving back in the UK (You can get them here but they are not as nice). 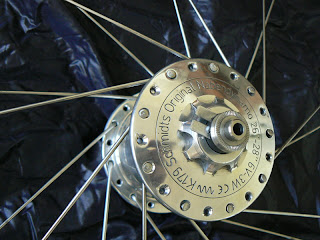 There was no easy DIY fix for the dynohub problems, so it had to be taken out of the wheel and sent off for examination by skilled repair technicians, who informed me that not enough glue had been used in the manufacture, the stator had come loose, and they had "never seen one like it". It was returned to me properly glued and ready to roll, and I was very happy to get my bicycle back after a couple of weeks downtime.

My knees are feeling less rattly than they were at the end of the trip. Knee problems can often be caused by bending the knee too much while pedalling. I am gradually raising the saddle, and may also try shorter cranks, to try to reduce the problem in future.

France was probably the least exotic-sounding of all of the destinations I'd had in mind, and I do seem to end up there for lot, whether for skiing, cycling or just passing through. However, it was a good "safe" choice for a first lone tour, and first long camping and cooking trip. It's also well-renowned among the touring community as being a cyclist's paradise and, for the most part, the cycling really was very pleasant, the people agreeable and the scenery, while a bit dull and farmy in some places, beautiful in others. There are parts that I'd happily do again, and parts that I'd skip if I wasn't interested in riding the full coast-to-coast distance.

Travelling alone was fine, and in a country like France the biggest worry is that people are worrying too much about me back home. People I met were often surprised to hear that I was travelling alone. It was nice being able to do exactly what I felt like without having to argue about it! I didn't get lonely much as I was usually too busy. There's always something to be getting on with - looking around town, putting up the tent, cooking, laundry, washing up, cleaning mouldy stuff out of panniers, planning tomorrow's travels, writing about today's... I wish I'd met more fellow cyclists along the way, but perhaps the time of year wasn't so good for that. Things got a bit more interesting towards the end as I "tuned in" to the language and became more able to hold conversations with locals.

I was hoping that writing about the France trip would distract me from getting over-excited about the next one quite so quickly, unfortunately that's never gonna happen and I'm already well into planning a trip around the Western Isles of Scotland which will probably happen some time in the spring.
Posted by Hel at 12:26 pm

Email ThisBlogThis!Share to TwitterShare to FacebookShare to Pinterest
Labels: 2007 France