After the antics of Wednesday night and the ensuing tiredness, we decided not to go too far today, so we stopped in Westerstede and found a B&B.

So far, Germany has been a pleasant surprise. In the north-west corner at least, there are still lots of cycle paths (although some are not so well maintained) and cyclists, some lovely towns, cheap food and B&Bs and plenty of cafes selling Italian ice cream, of which we have eaten far too much already. 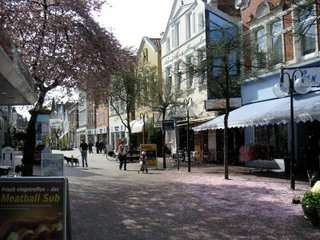 We spent Thursday night in Leer, which was lovely. I spent the afternoon wandering around the high street, upon which there was a tree in full blossom, with the wind blowing its petals over passing shoppers. I managed to find a nice waterproof for 30euro in the town bikeshop, which was stocked with all the best bits of German bike kit (Ortlieb panniers, B&M lights, and I'll bet they had a few SON dynamos hidden behind the counter) at about half the cost you pay for them in the UK. Every town we've passed through seems to have a decently-sized bikeshop.

On Friday we stopped for lunch at a pub, where we ordered stuffed pancakes at apparently 4euro each. When we ordered zwei Pfannkuchen, the waitress asked whether we wanted two each - we thought she'd misunderstood us so we said no, only one each. The pancakes came, we ate them, they were good. The bill came, and it said 1 x zwei pfannkuchen i.e. 4 euros for two stuffed pancakes. Wish we'd noticed a bit sooner and gone for two pudding pancakes too!

We've been noticing a lot of Greek restaurants on our travels in Germany so far, which is cool. In the UK, you'd have to look hard to find a Greek restaurant outside of London. Same for Mexican, of which we have seen a fair few in the last couple of days. In the Netherlands we ate Thai, Chinese, Indian and Mexican (twice), but unfortunately didn't get around to any herring.

We're finding it harder to communicate now. Our German is even shoddier than our French and, unlike the Dutch, not many people seem to speak English here. But we're getting better. I managed a whole conversation in German with the lady in the tourist office the other day - and we have spent three nights staying with people who speak no English... we're getting by OK!

Saturday evening we visited an Italian restaurant whose owner turned out to be English and very friendly. She taught us some very important things like how to ask for tap water in German (we had tried at lunchtime but ended up with a rather expensive jug of fizzy water) and the few Polish phrases she knew. The food was also fantastic, the carbonara went straight to the top of our best-ever-carbonara list, and I had a stupendously alcoholic zabaglione for dessert.

Yesterday, the weather turned nasty, we got to Hagen (sadly no Dazs) and it started hailing on us, Dgym turned into a freezy cold wet thing and I wasn't too happy either - so we stopped at the only hotel we could see, which was attached to a very tasty Greek restaurant. Mmm, Lammfleisch mit Spaghetti. Today was also quite rainy, Dgym has no waterproof gloves so we improvised and he now has some very fetching plastic bag mittens. Pictures coming soon...
Posted by Hel at 3:48 pm

Curious to see those plastic bag mittens. Are they colour-matched? :-)