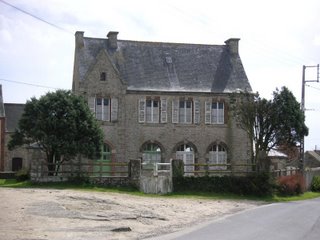 We were excited to get going this morning and get out onto the coastal road. We had been warned by many people about the big hill going out of Cherbourg - I guess this must have been on the main roads, as we managed to avoid it.

Cherbourg has lots of cycle paths, consisting of two lanes, each of which is at least the width of your average UK cycle path, and accommodates dgym's trike nicely. The only problem is that both cycle paths and roads are crossed by numerous railway tracks, some of which are at funny angles, so you have to be careful about crossing them.

Once we left Cherbourg, the cycle path stopped and we ended up following the Route Val de Saire through quiet, picturesque coastal roads and past tiny villages. Drivers were very patient, unhurried and considerate, and were few and far betweeen (With the exception of the guy who right-hooked me in St Vaast). We exchanged lots of waves and bonjours with fellow cyclists, walkers and random bystanders.

The weather was lovely and sunny all morning, but started to pick up a wind around lunchtime, which was quite brutal by mid-afternoon, so we stopped in Quettehou for the night, after 33 miles. There was a lovely moment going through the quiet little streets of Quettehou, dgym ahead of me, and as I passed a small shop I saw the elderly shopkeeper, cheek pressed up against the window, gaping in awe. It was like a scene from a car advert. "Ohhh - eet eez ze latest Peugeot!"

Finally - for all the panda-lovers and cow-lovers out there, we have also discovered a new species - the PandaCow. Moo! 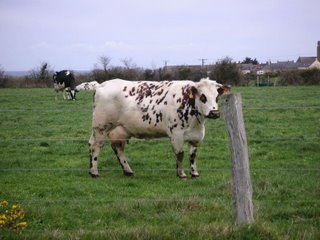 Agh broken image (the second one)!
"prettyhouse.jpg" doesn't work - wrong name/failed upload? Delete me once fixed/taken out if you like.