We conquered the hills, and now have hundreds of miles of flatness ahead of us. We left at 8:30 this morning in order to get some extra distance in, and the plan worked well.

Outside Boulogne, we encountered a group of brightly-coloured skinny lycra-clad cyclists on racing bikes, presumably on a club run - or rather, they encountered us, said bonjour as they passed us going up hill and sped off into the distance. We then passed them a few minutes down the road, having a break. They overtook us again while later. Again, we passed them having another break. Again, they overtook us. I began to suspect they were just showing off - look, we can overtake you with our muscles and our lycra and our feather-light bicycles... and we can do it again and again. But we didn't see them again after that. 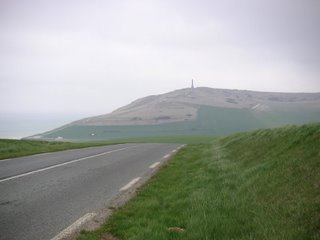 The hills were quite unfriendly today, and there were quite a few of them. For every slope we crawled up, I felt a little glimmer of hope that maybe this was the last one before the flatlands, only to see more hills when we reached the top. Eventually, we saw a huge hill in front of us and stopped to check the contours on our map. The hill turned out to be Cap Blanc Nez, indeed the final hill. And it was a real tough one. Probably a 13-14% gradient over about half a mile, the biggest hill we've tackled so far on this trip. But it was encouraging to know it was the last, and really satisfying to reach the top and roll down towards Calais. It was all easy after that - the terrain was lovely and flat, and the wind was on our backs. 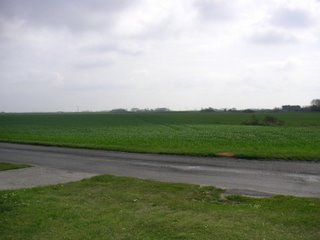 We were considering staying in Dunkerque but it turned out to be a bit of an odd place. We followed signs to the Centre Ville but never actually managed to find it. We did make it to the beach, which was quite lovely and had a cycle path along the sea front. That was nice - but we somehow managed not to find any hotels. We weren't too set on staying there, so kept going east. Two towns later we were in Bray-Dunes, the most northerly town in France, which is where we are staying the night (yes it does begin with B, but we'd got as far as we'd intended for the day) Belgium's just down the road, and we'll cross over early tomorrow.

My wheel has behaved itself today. It is round, and it has all its spokes. That's pretty much all you could ask of a wheel.
Posted by Hel at 11:41 am