So it's true - they really do leap out at you and start cheering you up hills. We were struggling up a slope... uh... I don't remember where now. Probably somewhere near Carantan... when this little French chap appeared out of his driveway and, miming a pedalling motion, started calling out "Go, go, go!" Or something like that.

So we have still have failed to find internet, whether it be wireless or in cafe form. We saw a hotel last night with free wifi in St Vaast-la-Hougue, unfortunately we had already got another hotel for the night. The closest we came was an internet cafe this evening in Bayeux. I ran excitedly down the street towards it (knowing it would have closed for the day, but there's always tomorrow morning and it was still exciting), only to find that it had closed permanently. Grr! And they seem to love their WEP here (wifi encryption) - in England, most wifi routers are Belkin and unsecured by default - it's easy to find one and hop on. Wanadoo are quite prevalent here, and their routers seem to have WEP switched on by default. However, we have been informed at the hotel that post offices generally provide internet access, so we will try that tomorrow. 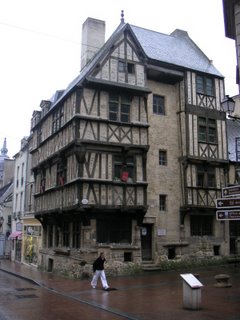 We're spending the night in Bayeux, having ridden 67 miles today, that makes a nice average of 50 over yesterday and today. The terrain has been beautifully flat so far and I think our legs are in recovery now as we managed to average about 12mph today rather than our usual 10. Bayeux is really pretty, the high street has some lovely old half-timbered buildings. It's twinned with Dorchester, which is where we were just three days ago.

I'm a little worried about what we'll do over Easter - apparently it's a big deal here, and a lot of things close. We'll need to stay fairly close to big towns to maximise our chances of food, water and shelter.
Posted by Hel at 5:24 pm

Do they keep the famous tapestries there? Did you have time to go see them?

I think they do keep the tapestries there, although we didn't get around to seeing them, far too busy running around bakeries and charcuteries picking up our lunch!