So yesterday was a day of wifi, yay! We checked into an Etap hotel with Orange wifi. What we didn't realise was that it was wifi for only particular rooms (we checked in by machine so there was nobody to explain this to us) so the signal was so weak in our room that dgym had to get onto the top bunk to pick up anything, and then it was intermittent. It was OK out in reception though. Orange wifi is a bit annoying in that you buy your connection, say 24hrs worth, and it connects you immediately. If you become disconnected, e.g. because the signal is pants, you need to re-enter your login and password. When they connect you, they give you the login but not the password. The password is emailed to you, and email takes time to go through. So if your connection is so bad that you don't stay on long enough to get to your email... and if it's Easter Sunday so there will be no tech support to help you... doh! Thanks Orange. I had to go and sit in reception with a good signal so I could buy another hours worth so we could get to dgym's email and get his password. Of course, that's probably what they wanted us to do.

Today I popped a spoke about five miles out of Treport, rear wheel drive side - if you happen to carry spare spokes, that's the worst place you could break a spoke as you have to remove the rear freewheel to replace it. If, like me, you don't carry spare spokes, it makes no difference because you can't replace it anyway. The immediate problem you have when a spoke goes is that the wheel goes out of true (i.e. becomes unevenly tensioned and loses its shape) and will rub against the brake pads once per turn. A quick retrue with a spoke key sorted that out, but the wheel's still not quite round and as a result gives a slightly bumpy ride. It's not advisable to ride on such a wheel for very long, as it puts greater strain on the other spokes (especially with the loads I'm carrying) - but it'll get you to the next bike shop. Damn machine-built wheels. I built my own front wheel and it's winning 0:2 on the broken spokes front. 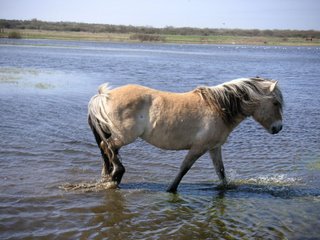 The terrain today was mostly very flat, we cycled up from Treport along the Picarde coast, around the Somme bay and have ended up in Bercke. The sun came back out after spending a few days in hiding, so our moods were somewhat brightened. We rolled (one of us in a slightly bumpy manner) along miles and miles of flat, wide and pleasant cycle path, most of which appeared quite freshly laid. Most of it was about three times the width of your average English cycle path. Maybe it's just because it's a national holiday, but the paths seemed quite well-used. It's nice to see that, even with roads that are not too intimidating, the French are making a respectable effort to make cycling even more pleasant.

Berck was very noisy and busy when we rolled into town, but mostly with people on their way out from their bank holiday weekend, and it's quietened down now. We were able to get a hotel easily, it's even got a terrace although it's a bit chilly/windy to sit out there for long.

Once again we have run out of map - we've been relying on free maps from tourist offices since Dieppe and they're actually pretty good.
Posted by Hel at 1:01 pm