It's been a crazy couple of days.

Yesterday we left Zeeland for Zuid (South) Holland. The scenery wasn't particularly picturesque - lots of flat green stuff (although we did see some really tiny little baby horses, they were lovely) followed by a bunch of industrial stuff near Rotterdam. We crossed another a dam and took another ferry to get onto the Holland "mainland" and by the time we were in the region of Den Haag, we were exhausted and it was getting late. We headed for the coast and ended up in Scheveningen where we found ourselves cycling past lots of lovely-looking restaurants - Thai, Japanese, mmm... but with no hotels nearby.

Thanks to the help of a kind passer-by, Tony, who turned out to be Australian and a fellow traveller with whom we ended up having dinner, we were able to find accommodation - unfortunately all the hotels were full due to school holidays but we were able to get a room in a nearby hostel. The room was a dorm with 5 single beds, which we had to ourselves, but at 30euro each the place was a ripoff and in appalling condition, dodgy-looking electrical fittings, mouldy shower, leaky sink... which we could have ignored had we not been awoken at 2:30am by very loud talking from the next room. It didn't stop after a couple of minutes, so I leaned out of the window and yelled "Shut up!". The talking continued. I banged on the wall and in response learned that the Dutch are also quite capable of swearing in English. I ended up putting headphones on to block out the noise. 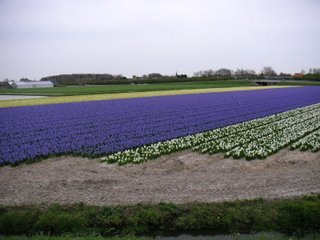 Needless to say, today we were pretty tired. The scenery improved, though. We went through wooded areas and national parks, and past tulip fields, which provided a lovely splash of colour to the day. The weather almost looked like it was going to be pleasant, but then it got cloudy, lunch was lousy, I stepped in dog poo, and then it started to rain. Then I snapped another spoke. Fortunately it didn't mess up the true of the wheel too much so we could carry on, but it's a sure sign the wheel's in a pretty bad way. We found a station cafe, stopped off for hot chocolate and managed to figure out we were just outside Haarlem. So we got ourselves into Haarlem, and found ourselves another overpriced hotel (as they all seem to be here, what few of them we can actually find - perhaps we're missing something?)

We managed to catch the end of the annual Haarlem flower festival, which took place today. Always fun to accidentally end up staying round the corner from giant flower-encrusted sculptures of elephants, giraffes, sphinxes, tulips and much, much more. 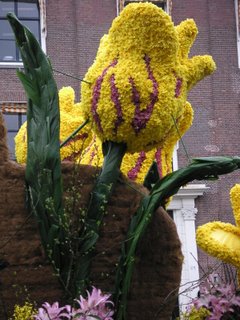 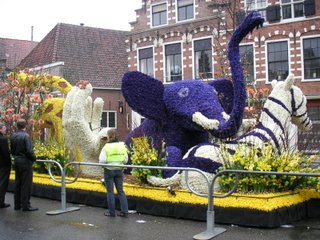 Time to order a new wheel online, and get it shipped to a friendly place further along your route.

I've not done that much riding, but 3 busted spokes seems a bit excessive.

Ah - or more like time to visit a bike shop in a very bike-friendly country and get a nice new handmade wheel with extra-strong spokes! Yes, I have a nice new wheel now and feel much more confident in riding on it.