So we reached that point where we had to start thinking about getting ourselves back to the UK for a couple of weeks, as we have weddings to attend, people to see and cute little nieces to babysit. We had originally hoped to be renting a place in Poland by that point, so we could just leave the bikes there and fly back. However, that turned out to be a little optimistic.

Our second crazy idea was to take an unexpected trip to Denmark and sail back from Esbjerg to Harwich with the bikes. However, we were still probably about a week away from Esbjerg, it was a bit more expensive than we wanted, and we decided we didn't really want the detour. I'm sure Denmark's nice, but maybe another time. There used to be a ferry from Cuxhaven to Harwich, which would have been really useful as we were probably less than 100km from Cuxhaven, unfortunately the ferry no longer runs.

We also happened to be close to Hamburg. So we got ourselves onto the internet on Monday evening and looked up self-storage in Hamburg and cheap flights from Hamburg to London. We found what we were looking for, so headed over to the storage place on Tuesday, rented a 1x2m box for 4 weeks and put away the bikes and most of our panniers. We got a taxi to the airport and went over to the germanwings counter to buy our tickets. Turned out to be about 40euro more than we'd seen online so we got onto the airport wifi (at a cost of 5euro), bought them online and at checkin showed them the booking confirmation on my laptop screen. Nicely done!

So we flew back to the UK (which is pleasantly warm at the moment), and the travels will resume in about three weeks. I think our legs will appreciate the break, although we've both been having a fantastic time and as far as I'm concerned, my legs can complain all they want but they've got a lot more pedalling ahead of them, whether they like it or not!

PS: The mittens picture, as promised. (To be fair, I look equally silly in my waterproof kit.) 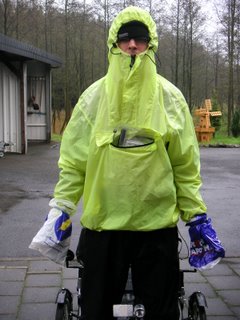 BTW, thanx for the postcard.

Hurrah! Lovely to have you back again. Want to speak with you both again voice-to-voice before you go off again. Well done for sorting out the tickets online at the airport, how cheeky, geeky and cool is that!

I didn't realise you'd be back so soon for the first break.