Tuesday 23rd May - Back again 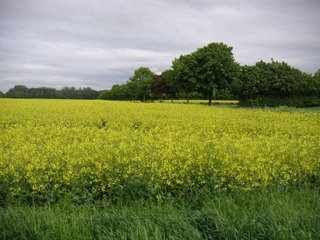 So we're back in Germany. Spring has arrived, and it's a good deal greener and leafier than when we left, although the weather is still quite tempramental. Yesterday was rainy when our plane landed, but had its brighter moments later on. Today was one of those days when there's a little rainshower every five minutes so you can't really take your waterproofs off, but also too warm for waterproofs to be comfortable attire. Ah well, at least it's not hailing.

It was lovely to see the bikes again, they had been OK although a little lonely on their own in a storage locker and, like us, they were itching to get going again. 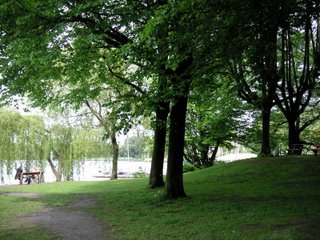 From Stellingen (suburb of Hamburg where we had our storage) we headed into Hamburg for lunch and ice cream, having spent the past three weeks thoroughly missing decent ice cream. (On one occasion I got desperate and ordered lemon icecream at an Italian in Guildford and it was so... English. Too much cream, not enough flavour, and it most definitely didn't zing) We ate our icecream by the lake, which was quite lovely, and then headed out of town, resuming our travels in an eastward kind of direction.

Glinde looked like our kind of place, small towns seem to serve us pretty well. Only when we got there, there was no tourist office and the only hotel with available rooms cost 100euro. Ouch. Fortunately there was an internet cafe around, so we found and booked a room in nearby Bergedorf. Still 80 euros, and still ouch, but it was getting late and we were exhausted from having got up at 4.30am to catch our plane.

The hotel room was OK, pretty small, no bath, hardly 80 euros worth. But at least it was close to restaurants and stuff, including a sushi place. We got a massive two-person tray of sushi to take away, it was really nice, and actually enough to fill us up (it's hard to do that with sushi). Breakfast was nice too, big buffet with lots of different meats, cheeses, salads, breads, etc.

Today we started out pretty late. We both caught various colds, sore throats, coughs etc in England and are still fighting them off, as a result we're not at our best and it was really hard getting up this morning. Dgym even went back to sleep after breakfast. After leaving the hotel, we wandered off to find a bike shop with waterproofs, as Dgym had washed his and lost all its waterproof stuff. We ended up at a huge shop on the edge of town but he didn't find anything he liked except a can of spray-on stuff to re-waterproof your raincoat. It was quite well tested today, and seems to be holding up.

We ate lunch at a bakery/cake shop in Schwarzenbek. Just as we were crossing over to get to the shop, Dgym got a flat from catching a front tyre in a drain which was concealed by a puddle. It was tipping down with rain at this point. The correct course of action in such a situation is to dive into the nearest cake shop and eat cake. Which we did, after eating lunch, in which I had a ham sandwich, and Dgym had two nasty-looking wiener things. Dgym also had a cake which was cherries and quark (soft cheese) on sponge, and was very nice. We then had two Quark Fruchties, which are basically fruit pizza - a sweet base, with quark as the cheese and berries for the topping.

When the rain had cleared up we ventured back outside to fix the flat. Dgym, knowing the trike's original tyres to be a bit weak, had brought back two Armadillo puncture-protected tyres from the UK and so took this as an opportunity to install one of them. It was about to rain again by the time he finished, so he didn't bother with the other, and so currently has three different types of tyre on his trike!

We ended up at Molln for the night. We arrived in town about 6 and raced to the tourist office, suspecting it might be about to close. It turned out to be open until 9pm and they managed to find us a room for 30euro, the cheapest we have had yet (No breakfast, but it's over a bakery so we can't complain). In comparison to last night's hotel, the room is amazing. We've got a private kitchen, shower/toilet and two twin rooms, one of which leads onto a little balcony. Private accommodation here really is excellent value compared to hotels. The only advantage the hotels have is that they're much easier to find. You need a tourist office to find private rooms, unless you're either willing to scour the residential areas of a town for "Zimmer frei" signs, or get on the internet, hope the town website has a listing of such accommodation, and phone around. But the tourist offices, when they're (a) present and (b) open, are usually really helpful.
Posted by Hel at 8:19 pm