Saturday: Cycling in the clouds

Today started out rainy, and stayed rainy until lunchtime. We started out of Cervera with a long climb into the mountains. It was supposed to be the scenic route but it's a little hard to appreciate the scenery when your eyeballs are busy being pelted with raindrops. 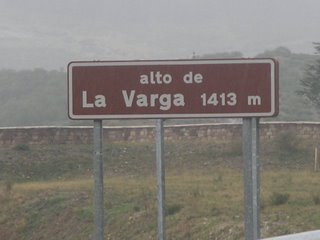 We reached the grand altitude of 1413m at one point today, not so hard to believe as it was preceded by an enormous climb. After that, the road dropped down into the valley of the Carrion river and things got easier. We stopped at midday for some lunch - we didn't really want to stop as we were damp and didn't want to cool down too much, but also very hungry. So we found a sheltered spot during a less rainy interval and got out the brie and baguette. (yes I know, but given the choice between French and Spanish cheese, what would you go for?) I began to change out of my damp stuff into thermal wicking gear, and just as I was pulling on my legwarmers, the sun began to show through the clouds for the first time that day. Of course. We were able to appreciate the scenery a little more after that. 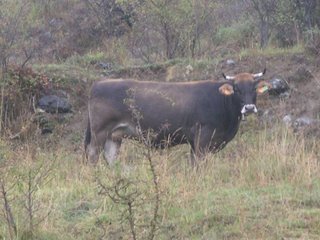 They have the loveliest cows here. They have sweet faces, fluffy ears and there are lots of babies around at the moment. We saw lots today, roaming freely over the mountains and valleys, and heard even more as they all wear bells. You can nearly always hear at least one - sometimes it feels like you're being stalked by cows. We found one cow happily munching leaves off a bush at the side of the road. She heard us, turned her head and gave us the guiltiest look we have ever seen on a cow. I'm not sure what she was doing wrong, but I think we caught her at it.

We reached Guardo at about 2pm. The signs to the tourist office neatly veer you off away from the town centre and towards a nice well-kept modern looking fountainy area. The office was closed, so we followed signs to the town centre which, to put it politely, is a bit of an Aldershot. Lots of cheap nasty looking bars and cafes, run down buildings, closed businesses, and unlike the other towns we've seen here, completely lacking in charm. However, we managed to find a cheap pension, got our menu del dia for lunch (which included bunny rabbits) just in time before everything closed, then some nice pizzas in the evening.
Posted by Hel at 2:08 pm

What exactly does a guilty look on a cow's face look like?????!!!!! Sounds like you're having lots of fun, keep it up!

I wish I'd been able to take a picture. I guess it's something you have to see for yourself... Try sneaking up on them from behind - they're usually up to something they shouldn't be.

Great post i always find it relaxing riding out in the country with animals in the fields but i have yet to see a guilty look on a cow.