The first challenge on Wednesday, after tearing Dgym away from the excellent doughnuts of the hotel's cafe, was to top up on water. As we passed through the town we kept our eyes open for a shop that might sell us a litre or two - no such luck. However, on the outskirts of the town we saw signs to a petrol station 500m away. 500m down the road, there was a turning and a couple of bars, but no petrol station to be seen - until Dgym pointed out to me the large, rusty overgrown petrol-station-like shelter thingy, which had clearly been closed for at least a decade. It is not just our maps that are out of date. Somebody needs to go around Spain with a big black permanent marker, correcting all the dodgy signposts. 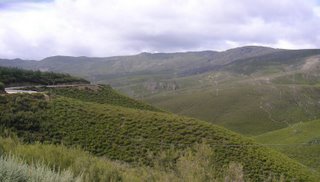 We then began our last few miles (about twelve of them) into Portugal, which consisted of a long climb followed by lovely winding mountain passes. The border was unmanned, as many of them are in Europe these days, but you could see where there used to be barriers.

So we carried on into Portugal, through small villages and past lots of heavily-laden chestnut trees, and found a snack bar in a little place called Raban. After some confusion in which we tried to ask for the ementa (menu) and they thought we wanted pimentos (peppers), a mixture of English, French and Spanish got us what we wanted. They didn't seem to have a menu but Dgym asked for chicken, I asked for fish and we had a lovely meal - nice home-made bread with cheese, sausage and delicious fresh olives, followed by our main courses, which were fantastic and actually served with vegetables (not something you usually get in Spain) - all for 15euro.

Raban was only 3km from the campsite we had intended to stay at, which unfortunately was closed. A real shame, because we had a recommendation for it, and it looked nice. For the benefit of anybody who is passing that way and wants a campsite - it's about 6km north of Braganca on the N103. Apparently it was open a few weeks ago but now, in early October, it is closed. About 1km away, in the direction of Braganca, is a restaurant for which we also had a recommendation. It serves wild boar casserole, and has a picture outside of a pig in a pot. 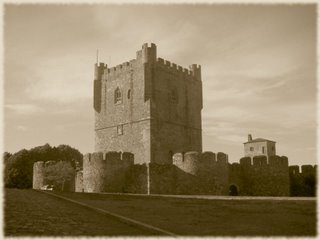 So we continued to Braganca, which is a very hilly city with a most excellent castle. Accommodation turned out to be very cheap and we got ourselves a room (with a decent hot shower for a change) for 25euro. Thursday was another rest day, and we stayed two nights, giving ourselves the chance to get an up-to-date map of the country and acquaint ourselves with the local cake shop. Both nights we ate at the Restaurant Pocas which was fantastic, huge delicious main courses and lovely puddings. We haven't had the chance to speak much Portuguese yet. Nobody has understood any of the Portuguese words we have tried to say, and quite a few people seem to know either English or French.
Posted by Hel at 9:28 pm

We later managed to make a trip to the restaurant near the campsite. It is called O Javali and it really is good.

Although one of the plates they bring out before the meal is (we think) pieces of pig ear. They are somewhat special and you may want to avoid them.