With apologies to horses

We took the bullet train south for 6 hours to Kumamoto, a city about half way down Kyushu, mainland Japan's southernmost island.

Despite our frequent dislike of cities, the ones in Japan are turning out to be quite enjoyable, providing us with tasty food, nice parks and pretty castles. People seem to be pretty good at being clean, quiet and respectful here so it is easier to coexist without the usual destruction of personal space and assault upon our ears. Kumamoto was no exception to this - it's a pleasantly lively town and we had a fun three days.

We visited Suizenji gardens which had ponds, stepping stones, cherry blossoms, herons and a mini Mount Fuji. We also visited the castle, a vast multi-level structure which has been partly rebuilt and provided a good couple of hours' wandering around gazing at pretty blossom trees and enormous stone walls. We were also going to visit Mt Aso but it's currently spewing poisonous gases so you can't go near the crater. However, from the top of the castle the volcano's activity was clear to see - it was quite a cloudy day anyway but it was definitely more grey and hazy in the eastern direction towards Aso.

The food in Kumamoto was lovely. We visited Sumo, a sushi bar a few blocks from our hotel - they didn't speak a lot of English but we ordered a couple of sushi sets which turned out to be fantastic - the chef was making it right in front of us and passing us the pieces as soon as they were ready. The fish was tasty, smooth, melt in the mouth, the rice beautifully textured and still slightly warm. On the negative side, this has almost completely ruined English sushi for me!

The following night we went to a barbecue restaurant - following the delicious steaks we had in Hamamatsu, we were up for more grilled meat.

However, this was yet another Japanese only menu with just a few pictures to go on. We ordered some tasty looking marbled meat and some other bits - the raw meat arrived thinly sliced and beautifully arranged with shredded raw onion, horseradish and some decorative flowers... and no grill.

Raw horse sashimi (basashi) is a local speciality - fish isn't the only thing the Japanese like to eat uncooked. Dgym was a bit bothered by this and tried to communicate that we'd really prefer a grill. This was either refused, or not understood because we didn't get one. And so we started on our our meal of cold dead horseflesh which (along with some other, warmer, things) was very nice. I'd like to say this has completely ruined English raw horsemeat for me but I'll leave you to insert your own Tesco lasagne joke here. 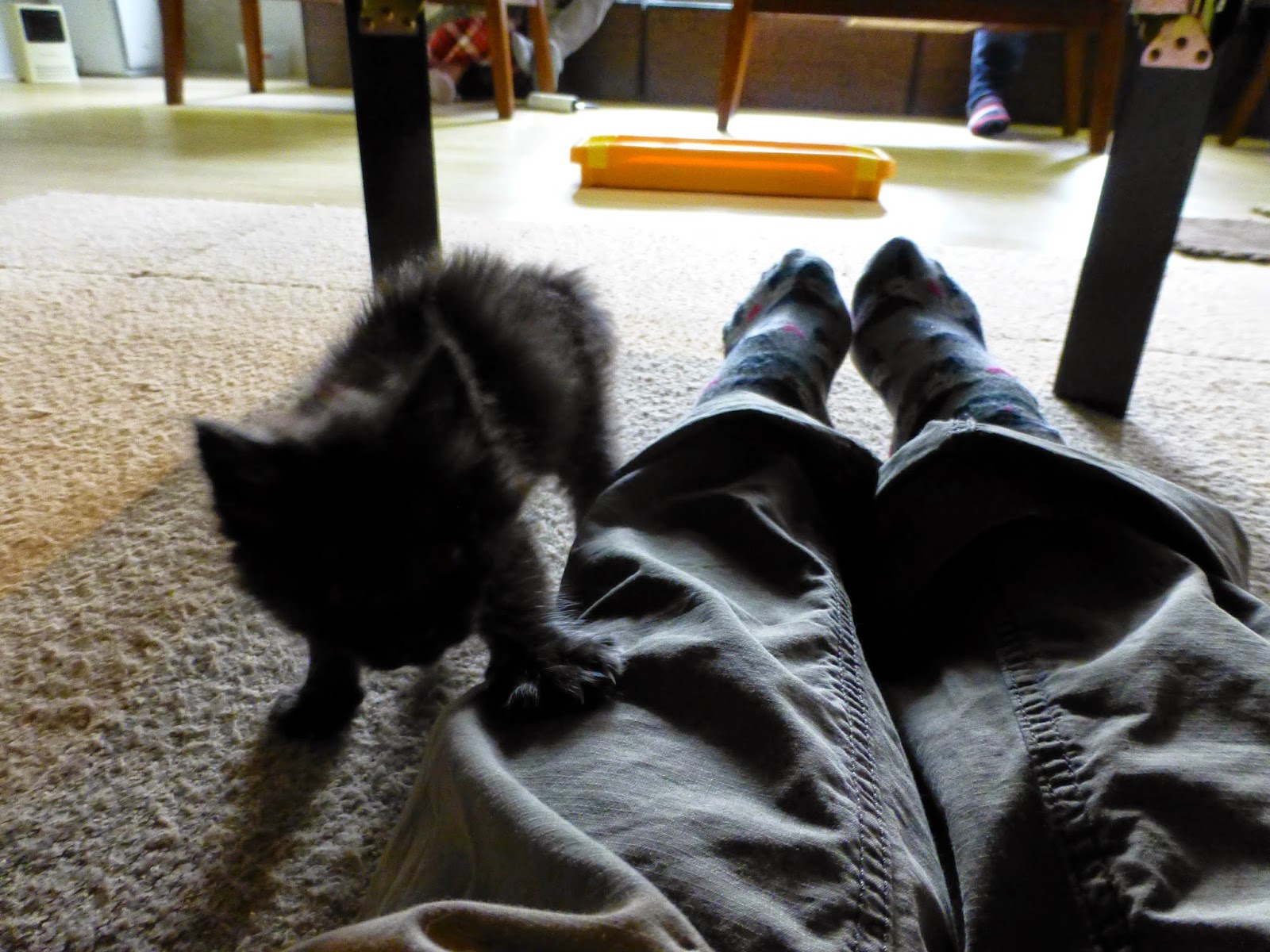 We also ended up in a cat cafe (Dgym's reaction to my suggesting this - "I hope they cook it better than the horse") - this is a cat shelter where you can go and interact with their cats and also grab a drink. One lady had the good sense to camp out next to a blanket and so had three or four furry companions snoozing beside her.

Most of the adult cats seemed a bit disinterested (i.e. they were cats) but we did spend a good portion of our time there with a tiny five week old black kitten who seemed intent on mauling my trouser pocket to death.