After our trip to the mountains we were ready for somewhere warmer so we headed down to the coastal town of Hamamatsu which was still bloody freezing. 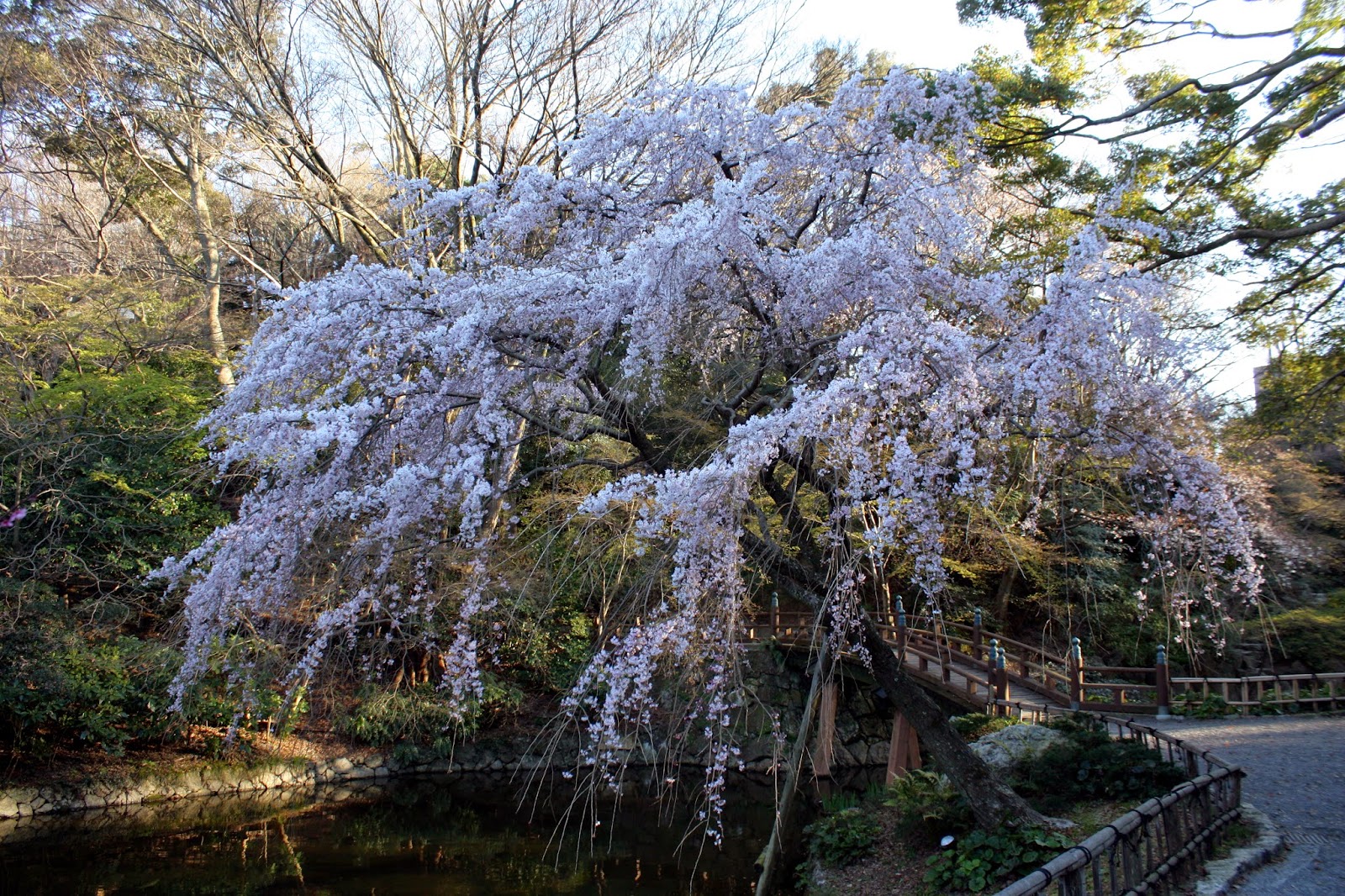 We headed straight for the castle and surrounding park, supposedly the best place to view cherry blossoms but, although one tree had taken the plunge and was dripping with flowers, the others were still quite hesitant, unlike Dgym in his ice cream consumption - he had to stop off at a nearby van in spite of the cold, because it's not a real holiday unless he has an ice cream every day. We had a nice time walking around the pools and across stepping stones.

Hamamatsu presented a bit more of a challenge in terms of language - our hotel receptionist's English seemed to be limited to "thank you" (much like our Japanese) but we managed to communicate via the usual means of hand gestures and pointing. Dinner was another challenge - on our second night we ended up in a restaurant which didn't even use regular numbers, with the help of my phone app we gave ourselves a quick crash course in Japanese digits so we could figure out the prices and managed to deduce some important food words from the pictures.

The journey to Hamamatsu had been our first trip on the bullet train (Shinkansen) which was fantastic, they certainly look the part, are incredibly comfortable and feel fast like a train should be. I have been in trouble with Dgym for pointing out they're no faster than the TGV (both can go up to 320km/h although the Shinkansen is frequently more like 260-280 and the TGV has a much faster record time) however it is also important to note that so far nobody has been on strike when we've tried to use the Shinkansen. We are finding that with the Japan Rail Pass, it's quite feasible to stay in one place and take day trips of a couple of hundred miles, which is quite a different travel strategy for us considering the Shinkansen will take you a quarter the length of Japan in the time it takes a Thai train to show up.

With that in mind, we took a 45 minute bullet train from Hamamatsu to Nagoya, where we caught the subway out to the end of the line and then took the Linimo maglev line all the way out to the end. Linimo is one of the three operational maglevs in the world. It's not a high speed train but this was an opportunity to ride an actual maglev so we were pretty excited, unlike most of the other passengers for whom it was just another journey.

The ride felt incredibly smooth - it's a driverless system so we sat at the front which was quite strange and felt a bit like a rollercoaster - a maglev track can go up and down slopes and around corners in ways that are hard for conventional rail. Even more exciting was reaching the end of the line and watching the track being switched over - the tracks actually bend to make the connection between one side and the other. And then we rode back again, picked up lunch (Dgym indulged his McDonald's fetish while I had a delicious fish-waffle toasted sandwich) and returned to Hamamatsu. Yes, we took the train all that way to ride the train - we know how to party.

Next day we walked a couple of miles down to the seaside park, we picked up lunch in town before heading out and were shocked to find no benches en route on which to sit and eat it. We made it all the way to the sea before finding a concrete block on which to perch and eat our bento boxes with basil seed drink and delicious weird little puddings.

The coast, facing out into the Pacific Ocean, bore strong reminders of the possibility of tsunami, with signs everywhere, tall buildings designated as tsunami evacuation points and a purpose-built hill in the park

On our last night in Hamamatsu we found a BBQ / pizza restaurant which also had an all Japanese menu but also some friendly English speaking customers to help us out - Dgym got his pizza fix and we also ordered a delicious lump of marbled beef which was gently grilled in front of us, sliced and served with onions and salad and was the most delicious, smooth melt in the mouth beef I've ever had. We've had some decent steaks in the UK and some quite nice ones elsewhere but nothing quite this tender. We stopped by at lunch time the next day hoping for more but they weren't open. We will be looking out for more delicious cowflesh on our travels.

Before leaving town we dropped our backpacks in a station locker and paid another visit to the park, and we were glad we did. It had warmed up considerably and just two days later, the blossoms had bloomed and the park was full of birds, squirrels and picnicking families!

We backtracked a little way to Kakegawa where we spent one night (that's Saturday hotels for you) with a lovely view over the castle from both our room and the ladies' onsen.