We spent a few days in Kobe. I only knew two things about Kobe before we got there - it had a big earthquake in 1995, and is famous for its beef. It's a lively city, and seemed busier than anywhere else we've been here, including Tokyo.

Kobe is sandwiched between mountains and sea, and has several cable cars taking you up onto the ridge overlooking the city. We took the Maya cable car + gondola on our first day in town - we have been trying to get as many forms of transport as possible into our holiday and this was an opportunity to strike off another two, so we weren't too bothered that we couldn't see the top of the mountains from the bottom and were happy to take a little adventure into a cloud. This is supposedly one of the most beautiful night views in the world, the problem being that (a) it wasn't night (at this time of year the last car back down is 5:30 so you can only do that in summer anyway) and (b) the cloud provided a perfect blank canvas upon which to project our own imagined views of Kobe and Osaka Bay.

There was a sign at the top of the cable car warning you to watch out for snakes - being British, we don't really get to see snakes in the wild - I've only ever had one or two fleeting glimpses, Dgym has never seen one - so to us this was exciting and we spent quite a while watching the bushes for interesting movement - we saw a shed skin but no actual snakes.

We took a day trip to Kyoto which was cold. It had been a bit fresh in Kobe but not too bad so I'd gone with raincoat over T-shirt, seriously regretting it when we got to Kyoto and realised it was colder - so first thing was a spot of hoodie shopping.

We headed out to Fushimi-Inari shrine and started the walk up through the hundreds of orange torii (gates), along with several hundred other tourists. I hate other tourists, they are so annoying, why can't they all just go away?

We got fed up and uncomfortable quite quickly, so took the next exit and found a path alongside the shrine, through the bamboo forest - which was incredibly pretty and we had it almost completely to ourselves - there were a couple of small shrines dotted along the way - not that we're too bothered for temple and shrine viewing, it's equivalent to wandering around churches back home, and we don't do that much either.

Next day we visited Osaka, again a short day trip from Kobe. Seeing that there was a tall building with a glass elevator up to the 35th floor, followed by a pair of glass-walled escalators suspended over thin air taking you up to the 39th - this seemed like another great opportunity to make Dgym feel ill. Despite it being a good deal lower than Tokyo Skytree I think the open air terrace helped, and here is a picture of him looking all nervous. 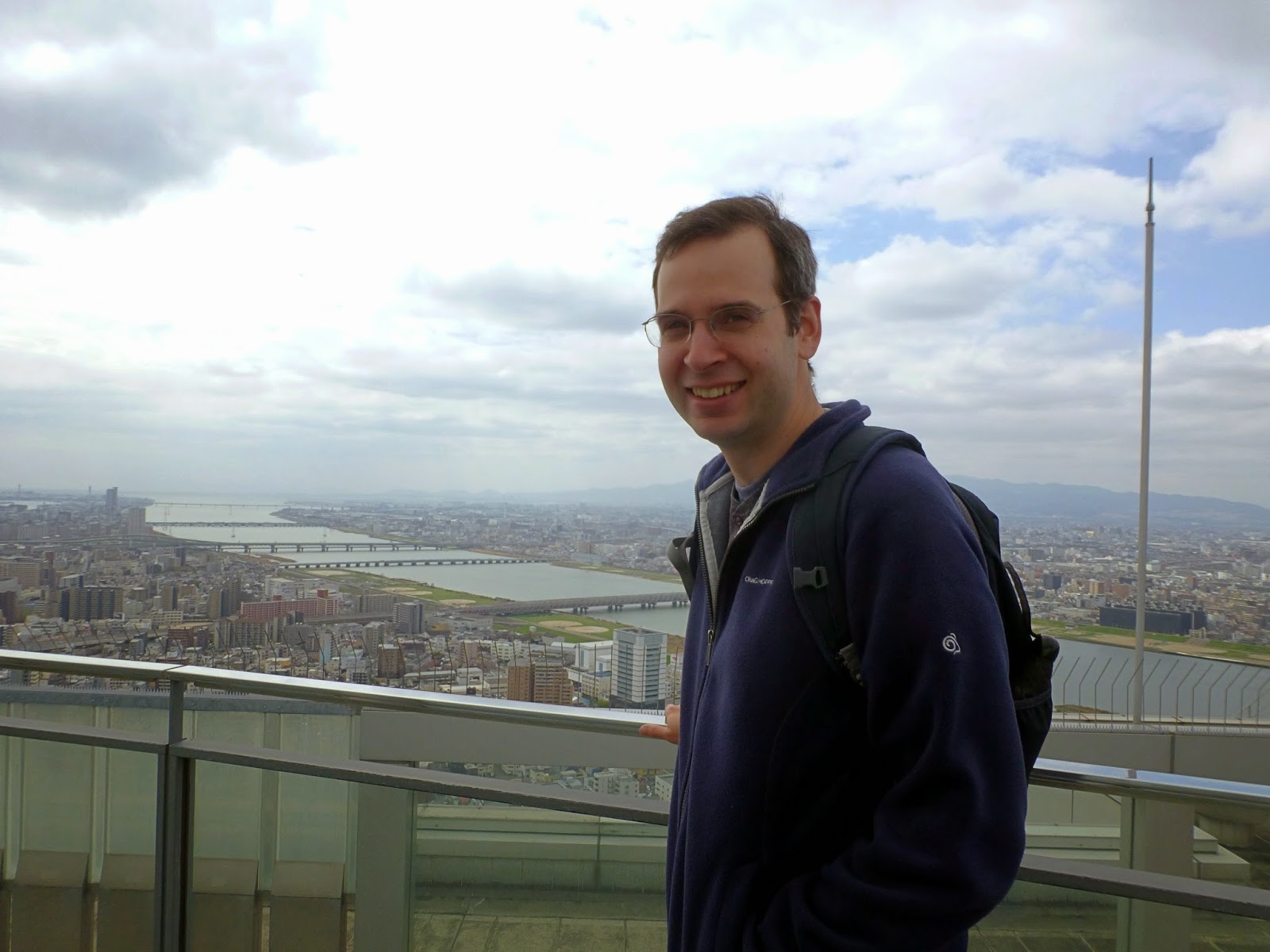 Oh yes, and the beef. We maybe went a little crazy on the Kobe beef but it really is very nice.