More than a week after the Year of the Snake began, the Vietnamese were still wishing everybody seasons greetings and listening to Abba's"Happy New Year" which is now firmly stuck in my head. 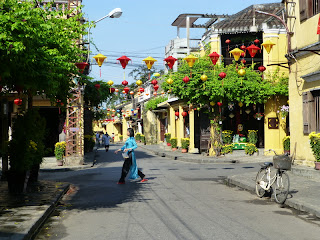 We spent five days in Hoi An, a small town about half way up between North and South. It's quite touristy, with a very photogenic old town full of pretty buildings, colourful lanterns and little old ladies with pointy hats and fruit baskets. Westernised restaurants are common, with full english menu and the opportunity to have a hamburger or pizza.

However, it's not hard to find proper Vietnamese food in the form of street restaurants, which are much like Thai ones except the seats are much lower - think those little foot stools you stand on to get to a high shelf. The Vietnamese are short, but not that short! People throw their napkins and food scraps on the floor, apparently a holdover from when they had pigs snuffling around cleaning it all up, only they stopped using the pigs.

We had plenty of pho - I say too much, I'm not a big fan of the delicate aromatic flavour and prefer a Bun Bo Huey, which is a spicy noodle soup with beef, pork and lemongrass - it has a similar hot & sour flavour to Thailand's Tom Yum. Baguettes were a little disappointing, in the UK a Vietnamese baguette (Banh Mi) has meat or eggs or whatever and lots of crunchy vegetables like grated carrot, beansprouts etc. The ones we had in Vietnam were less crunchy and really just a strongly flavoured meaty sandwich which didn't really suit our tastes. 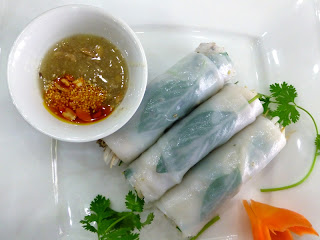 Spring rolls were a particular favourite with us, especially the rice pancake variety which are filled with lovely crunchy vegetables, shrimp etc. I tried the local noodle speciality Cao Lau, in which the noodles are cooked three times in a special kind of water that you only find in Hoi An - they had quite a delicate, unique flavour.

I went on a food tour which was pretty interesting - this involved a tour of the market, a walk around the streets of Hoi An, and sampling of approximately forty different foods and drinks spread over five hours. I had no breakfast and set out hungry, which seemed like a good plan but after about six foods I was ready to stop - I'd particularly enjoyed the first few things which included half a freshly made spring roll and a delicious sweet black sesame soup called Xi Ma - it looks like motor oil or tar in a steaming bucket on the street but I love black sesame flavour and it was delicious so I foolishly opted for a second helpings.

I made it through the full forty foods anyway, trying to pace myself and just get a taste of everything, settling into a steady pace of continuous low-level eating. By the end, I wasn't even particularly full and was ready for lunch a couple of hours later! 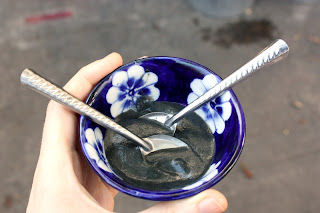 Other highlights included silken tofu melted into ginger syrup (so smooth and creamy), rice pancakes with minced wood mushroom, crispy wontons (another local specialty, they're topped with salsa and taste like a cross between wontons, nachos and pizza).

We learned some curious things about Vietnamese tastes - during the war, Vietnamese soldiers got very hungry and started stealing cans of spam from US army bases. Somehow the delicious spammy flavour caught on and it became popular after the war finished. Native versions are produced these days, and if you sit down in a Vietnamese restaurant and see a pile of long thin banana leaf parcels on the table, those might well be spam sausages to be snacked on while you wait for the real food. We had the opportunity to try both the beef and pork flavour of these and... well, let's just say I've never really got into the spongey meat scene. (I've also sadly never tried the real thing so couldn't possibly compare).
Posted by Hel at 3:19 am