Floating market and a 4D film

We spent a week in Bangkok, recovering from jetlag, getting used to the heat and seeing some more stuff. It's a huge city and there was plenty we didn't get around to doing last time so we had no problem filling our days with things to do and filling our bellies with tasty food. 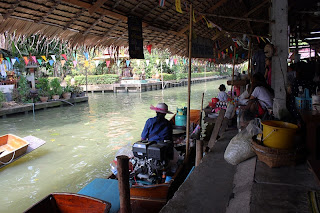 At the weekend we visited a floating market - I read up on various markets around Bangkok and decided that Khlong Lat sounded genuine and untouristy and also one of the easiest to get to (where easy to get to means going to the end of the Skytrain line and then spending 20 minutes in a taxi).

Getting to the end of the Skytrain line was a bit of an adventure, when we came to buy the tickets it turned out they'd added two extra stations worth of line since somebody had written the instructions for getting to Khlong Lat, so we could go even further out in that direction. We had to change at Wong Wian Yai (the old end of the line) and get a different train onto the new bit, which we hoped would take us two extra stops. It only took us one - turns out the last station isn't quite ready yet, but we had to shuttle back and forth on the train a couple of times to figure that out!

The taxi journey was interesting too, I'd marked the wrong location on the map so, following on GPS, we started to think he was taking us to the wrong place, but weren't too bothered as he had repeated the correct name back to us twice, and also the scenery was kind of pretty and it felt like an interesting adventure either way. We ended up at a market anyway, all day we were a little unsure whether it was the right one - turns out it was.

Khlong Lat isn't the floatiest of markets - there were several vendors on the river selling food but they didn't move around much. I'd imagined floating markets to be more like a giant sushi bar where you sit by the edge of the water and food comes to you along the canal. Most of the market action was indoors in the fixed buildings, but it was still excellent and there were lots of interesting looking stalls, unfortunately we didn't eat that much as we've been finding the heat to be a real appetite killer. My favourite bit was the lady making pretty deep-fried crackers by coating a flower-shaped mould in batter and then plunging it into boiling oil.

There were also some tiny turtles in a bucket. I thought they were probably for food (no, I didn't eat any) and Dgym thought maybe they were pets, but further reading reveals that people buy them to release into the wild, which is supposed to bring good luck. Especially for the turtle, which has just escaped being eaten and/or made captive.

I'd recommend Khlong Lat as a nice genuine market experience - few tourists, and it was nice to see people enjoying their sunday lunch! If you're after a bustling market with lots of boats, I hear Damnoen Saduak and Amphawa are better for that, although much further out.

We headed back to Bangkok soon after lunch as we had some very different plans for the afternoon, involving the 4DX cinema at Siam and two big buckets of popcorn. We'd always assumed that the fourth dimension is time, but how wrong were we? It turns out that once you've got a 3D film, you add extra dimensions by rocking the seats around every time there's a fight (we were watching Hansel and Gretel, which has quite a lot of those) and periodically spraying people in the face and releasing scents. My personal favourite were the back kickers which kept making me want to turn round and throttle the annoying child that wasn't actually sitting behind me. Basically, if 3D didn't make you feel ill enough already, 4D's here to help. It was worth doing once though - it was also my first 3D movie and whereas 3D alone is plain lame, at least 4D made it an amusing experience.
Posted by Hel at 11:56 am