We arrived in Ho Chi Minh City, Vietnam, a few hours ago. First impressions are that they do a lot of beeping here, and the coffee is insanely awesome, and we wonder whether there is some connection there. It is extra-crazy here due to the upcoming New Year - the streets are beautifully lit up, I'm hoping we'll see some flower displays tomorrow and everywhere people are carrying balloons and giant plants around on their motorbikes.

We were kind of expecting the traffic - it sounds like it makes a strong impression on everybody who comes to Vietnam. The advice normally given when crossing the road is to close your eyes, step out and let the traffic weave around you. You'll grow old and die on the pavement if you wait for a clear moment. What nobody mentioned is that the same rules appear to apply for cars and motorbikes at major junctions, either that or our taxi driver was a maniac. Bangkok traffic is already beginning to look tame.

We have, however, had a lovely dinner at the Pho 24 chain (with insanely awesome coffee), followed by a couple of delightfully crunchy spring rolls and what can only be described as very thin, crispy caramelised sheets of sliced banana.

Dgym's rabies situation is under control, in that he hasn't developed any yet and has an appointment for his day-3 shot tomorrow morning. (You have to be injected on days 1, 3, 7, 14 and 30) His hand is a little bit hurty but otherwise he is fine. I've never been fainted on before, and it would have been a whole lot less terrifying had I known it was perfectly normal to roll your eyes back and convulse for a couple of seconds when you faint.

I was actually taking photos when he was bitten. One minute it was "Aww, he has a monkey friend on his shoulder, that will make a lovely picture". By the time the camera was pointed and firing away, he had a second monkey not-really-a-friend jumping up and snapping at his hand. I'm not unkind enough to post that on the internet. As consolation, here are pictures of both of us disguised as spectacled monkeys: 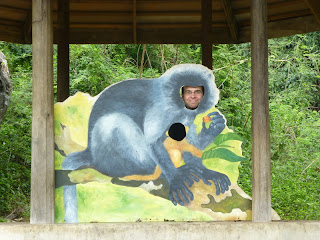 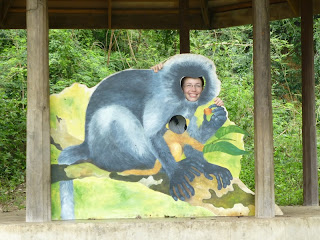 Really - you can actually tell he hasn't got any symptoms? Ha ha someone had to say it...

you guys have heard of a weremonkey right?! Helen, next full moon handcuff James to the bed before going to sleep. Better safe than sorry.
Have fun, Pete.

It wasn't a full moon when I got bitten so I'm pretty sure I am safe from the curse. And I feel fine anyway, casually sinking below a tide of all encompassing rage. Just wish they could do the steak rare enough around here to keep the hunger at bay.