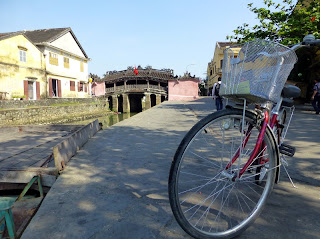 We hired bikes in Hoi An and rode through some beautiful countryside to to the beach, which was clean, sandy and full of Vietnamese families enjoying their weekend. We spent a couple of afternoons there chilling out, reading, drinking cold drinks and eating tasty seafood.

I rode into town a couple of times which was a bit scarier - junctions are slightly terrifying when you're in a huge crowd of motorbikes and wanting to turn left. There's also a stream of people riding bikes and scooters against the flow of traffic on the left hand side.. hey, if you're going that way and want something on the other side of the road then why not? It's crazy, you need eyes in the front, back and both sides of your head at all times but I survived!

I did a sunrise photography workshop which involved getting up insanely early (5am pickup - Dgym is not into photography or mornings so funnily enough he opted out), piled into a minibus with five other sleepy tourists and driven out of town to catch a ferry to a nearby fishing village. Fortunately this involved the intake of some lovely Vietnamese coffee and a gorgeous sunrise as we crossed the water, so everybody perked up pretty quickly. We were taken to see and photograph the fishing boats coming in to shore, women coming to meet the boats and fight and haggle over their contents, seafood being weighed and packed up, huge blocks of ice being chipped to keep the produce fresh. 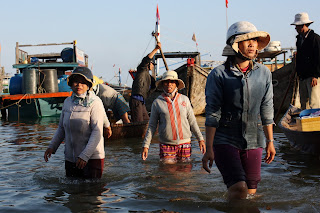 We were given some very useful advice on how to photograph people, how to approach them and make sure it's OK to do so, show them the photograph afterwards and tell them "Dep!" (Beautiful) which often raises a smile. (Although you don't do this with busy fisherwomen) We were then led on a walk through the village followed by a visit to a fish sauce factory which gave us the opportunity to practise low light photography - i.e. steadying a camera / operating a tripod whilst also holding our noses!

I learned a lot anyway - it was well worth getting up hideously early for, and as if I didn't already have hundreds of photos to sort through when we get home, I now have hundreds more!

We flew out of Vietnam last week, having spent about a week and a half there. It's a tiny amount of time for such a big country and I think we barely scratched the surface of what it has to offer. We arrived with a few preconceptions, mostly about it being less laid back, busier and less friendly than other countries in the region. 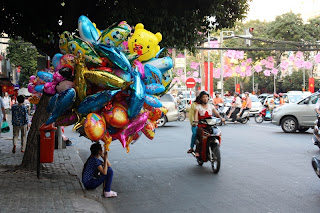 It's certainly noisier. The constant horn beeping in Saigon is insane, it got a lot less in Hoi An where there was much less traffic, but still the default state of most drivers is to be beeping as often as possible. It's not at all an angry beeping you might get in, say, the UK or the US - it's very much what beeping is actually meant for, saying "I'm here". Some might say it loses its meaning amid the hundreds of others also saying "I'm here" but hey.

We didn't find it at all unfriendly - we met many lovely smiley and friendly people in Vietnam, especially once we got away from the city. There was probably a little price gouging but we did find in some cases repeat business quickly started to earn discounts, so maybe it's not so much prices for locals but prices for regulars.

However, the taxi drivers need to start behaving themselves! We were aware of various scams when we arrived, so made sure to arrange for a taxi from a desk in the airport, and on the streets only pick up taxis from companies we "knew" to be reputable. Unfortunately we were still screwed over for about a tenner by a Mai Linh driver who decided the meter value (which read 40.0 or something for a 10 minute journey, meaning 40,000 dong which is about £1.20) should be multiplied up with an extra zero and we owed him about 400,000 dong. We were new to all these zeroes, and pretty sure he was having a laugh but didn't have much to back us up so we paid up, scowled a bit and moved on. Some taxis come with a sticker that make it unambiguous, this one didn't. Oh well... other journeys we took were fine but it pays to agree a price beforehand, or be very clear about how the meter works.

To end on a positive note about Vietnam: we are missing the coffee! 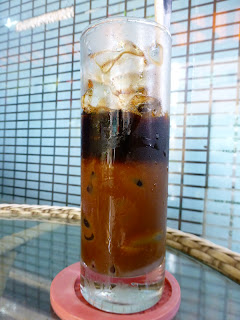