We stayed in Locknitz last night, about 10km from the German/Polish border. We'd been planning to stay in Pasewalk, which was further from the border but a bit bigger - but Pasewalk wouldn't have us, there seemed to be some kind of car show going on and all the hotels were full. So we continued down the road, looking out for accommodation, and for the first time found private accommodation without the help of a tourist office, when we noticed a Zimmer sign outside somebody's house. The owner turned out to be a sweet old lady, who spoke so clearly that we probably would have understood her very well, had we known more German words. We slept very well until 20 to 10 the next morning, and then set off for the border. 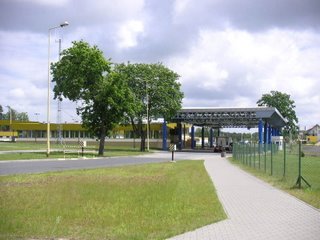 This was the fourth border we had cycled across, and all the previous ones had been quite insignificant. France/Belgium had a small sign at the side of the road, you could easily have missed it. Going from Belgium into the Netherlands there was an International Dijk marked, although the point at which we crossed was not very clear at all. Crossing into Germany, again there was no border sign, but it was clear we had crossed over when the cycle path stopped and the road signs changed. Germany/Poland was a different matter. There were signs telling us when it was 3km and 1.5km until the border. On approaching the border, we were told which lanes to get into - and the border itself was marked by buildings (to be expected, Poland's only been in the EU for a couple of years), manned and passport-checked (which we were somewhat more surprised by). Well, they decided to let us in, so we rolled on into yet another new and strange country.

We had no maps of Poland. We still have no maps of Poland, other than a large-scale overview I downloaded the other day. So we decided to head for Szczecin, knowing that it wasn't far away and it's big and should have the resources we need to help us start out in Poland - i.e. a map shop, some currency, and somewhere to stay. Riding into Szczecin, we began to realise it's very big, and it took a long time to get in - not helped by the fact that the roads looked like a crazy place so we were crawling along pavements and/or cycle paths at a snails pace, dodging parked cars, wonky paving stones, etc.

We found ourselves a hotel. The first one we asked at was 120zl. for the night (about 25GBP) so we took it. Unfortunately it's one of those places that (a) has no curtains, and is overlooked by many streetlights (b) has a leaky toilet (c) has the world's creakiest beds and (d) makes you feel a bit grimy, and you know that if you try to take a bath you probably won't come out any cleaner. (How annoying - in our travels we've only stayed in about three rooms that had baths). Places like this aren't too much of a problem if you know you can just move on the next morning, but I'd be a bit miffed if I'd booked a weeks holiday here.

It hasn't rained much today, although it is rather cold. I bet England's getting all the nice weather now, isn't it.
Posted by Hel at 10:03 am