Since we have ended up staying conveniently close to the German border, we decided to make the most of this yesterday and pay a visit to the seaside town of Ahlbeck, which is about fifteen miles from where we're staying and just over the border from Swinoujscie, where we stayed a couple of weeks ago.

The journey over was pleasant - between here and Swinoujscie it's mostly main road, upon which there is a "slow lane" for tractors and other slow vehicles, and this acts as a pretty good cycle lane. It's nice being able to ride the bikes unladen for a while, and remember what it's like to have some acceleration! Swinoujscie - Ahlbeck was also a nice ride, well-equipped with cycle paths, although on the eastern side of Swinoujscie there are occasions when the paths lead you apparently nowhere, or whoever was making the path has forgotten what they were doing, and you're suddenly on a bumpy pavement littered with lampposts and a huge drop down off the kerb.

One thing we've noticed about cycling in Poland is the dogs. We've seen plenty of dogs in our travels - it's well known amongst cyclists that dogs get pretty excited by bicycles and a favourite hobby of theirs is to give chase to a moving cycle, snapping at the rider's heels. Most dogs do react to our passing by, including some pretty big growly scary looking ones in Germany - but until Poland, it was no bother as they were always penned in by gates and fences. Poles, however, seem happy to let their dogs run loose, yesterday was the third time we'd been chased by a dog (fortunately so far they've all been of the small and yappy variety). I've seen a fair few discussions about this on cycling newsgroups, which suggest solving the dog problem by (a) spraying it with your water bottle (b) shouting "Bed!" or "Down!" at them, well, anything as long as you sound authoritative, especially in Poland where only an educated minority of dogs understand English. Unfortunately, my instinctive reaction is just to pedal faster, which doesn't help because the pedalling motion excites them more, and also because they run faster than you'd think. Eventually, just as it had caught up with my heels, I remembered to shout, and it went away. Dgym was also chased by a wasp yesterday, I'm fairly sure shouting at them doesn't help, but it disappeared before we could try the water technique.

Upon arrival in Ahlbeck, we found ourselves wondering where on earth, if we had chosen to travel by car, we might possibly be able to park it. 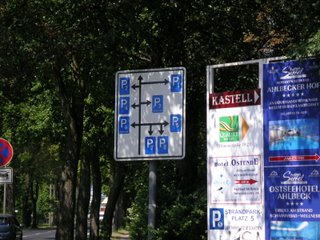 Fortunately we had no such problems with our bikes so we headed straight for the seafront and parked up opposite an Eiscafe (our main reason for visiting Germany). After a starter of lemon icecream, we had a very nice ham pizza and tunafish salad, followed up by steak & eggs, and a plate of spaghetti: 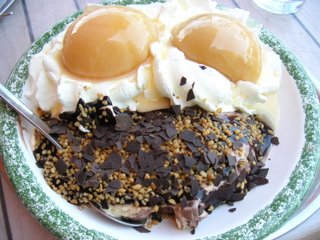 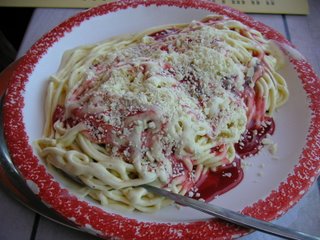 The steak dish consisted of a huge slab of chocolate and vanilla ice cream, covered with whipped cream, two peach halves, chocolate sauce and sprinkly bits. Dgym's spaghetti was made up of lots of strands of vanilla icecream with strawberry sauce, with some whipped cream underneath and sprinkled with white chocolate flakes. They were both fantastic, and quite big, I couldn't quite finish my steak, so next time we'll probably share one. But it was worth going to Germany for, and next time we'll probably go for a Pizza Eis, or Lasagne Eis. 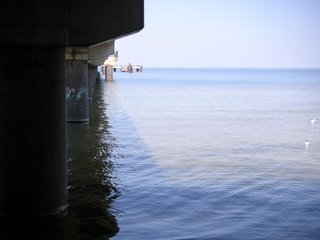 After lunch we went for a walk on the beach, by this point the sun was overhead and it was stupidly hot, so we went and hid under the pier for a couple of hours, watching kids playing in the water, seaducks and seagulls splashing around, and boats coming and going, and discussing important matters such as why on earth Dgym didn't spend his teenage years watching Baywatch. When we emerged at about half past three the sun was slightly more bearable so we got on our bikes and headed back over the border for a baking hot fifteen-mile bikeride followed by a nice cool shower.

And just because I'm posting a bunch of pictures, I may as well add one more - this is the sunset over the lake, as viewed from our room. 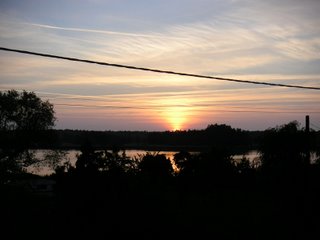 To help with the dog problem, why not take a bag of small rocks with you?

Molly that is evil - why not carry a small bag of kittens instead...

Happy birthday Jamsey!! Have an ice cream on me!

Hi Jamsey sorry you got cut off earlier, I couldn't seem to call you back - or even leave a message, is your phone working ok? I've just sorted out a little glitch with GBC for you. Love sis.

Excellent idea for taking care of the dogs Rachael, also helps gets rid of unwanted cats...
Hope you had a good birthday brother, sorry I couldn't call you either. I was only going to call you old anyway!!
Love Sis.

Oh crap, sorry Jim, forgot it was your birthday. Actually 2 days ago now!

Well, Happy Birthday for then!