Apart from the beginning of the day our route has flattened out a little. There were even some stages where we made some progress. Tonight we finally found an open campsite and even had a decent meal. We met a lovely Yorkshire couple also camping here and joined them for dinner. No one seemed particulary impressed with Spain as a touring country but we are now looking forward to Portugal even more and we know one good campsite and restaurant to go to, which is great as they are just as we come in. Another week and we will be there.

Last night we had fruit sandwiches for dinner. The restaurant that had been open in Soncillo when we arrived, had closed by 7pm. The owners of the shop over the road sent us down the road to a restaurant that was supposedly 1km away. At 500m away, there was no sign of it (and the next day when we headed further down that way there was still no sign of it) so we went back into town, by which time most of the shops had closed and we were only able to buy bread. Combined with our standard payload of kiwis, pears, olives, etc. we were able to make ourselves a fine dinner. Pear sandwiches is surely what posh people eat at dinner parties, right? The food of gods.

Early today we reached the grand height of 1020m before dropping down into the next valley. It's pretty amazing to think that since leaving Bilbao, we had climbed over a kilometre.

Most of today was valleys. We stopped for a picnic by the River Ebro, which included the most revolting cheese ever made. it was sweet and yellow and had a nasty aftertaste and absolutely no redeeming features - I wish I remembered the name so I could recommend you never buy it. Even Poland didn't sink to such cheesy lows.

We encountered a bunch of English people shortly after leaving Soncillo, they were gathered outside a pub in a neighbouring village, looked like some kind of car club as there was a bunch of posh-looking cars parked nearby with "GB" stickers on. We don't see many English people on our travels so we said hello, and one by one they overtook us as we climbed up the hill, some honking and waving. 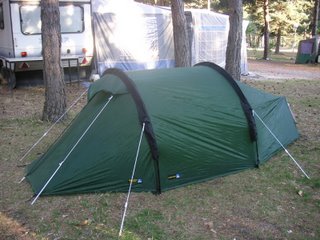 We reached our destination of Aguilar de Campoo at about 5pm. One good thing about Spain is that this is not too late for tourist offices to be open (in fact, they're often only just opening after siesta). So we found out that there was a campsite 2.5km out of town, and headed for that. What the lady in the tourist office failed to mention was that it was more like 4km out of town, half way up a mountainside. At least it was open... Fortunately the campsite had a restaurant so we didn't need to go back down for dinner.

We ended up camping about three spots away from a retired Yorkshire couple, Cynthia and Frank, who were staying in a camper van and making day cycling trips around the area. Frank came over to chat as we were pitching up, told us that there were loads of red squirrels around and that the restaurant had a menu de dia at 8:30pm that night. That's the kind of information we like! We saw some excellent squirrels - too dark and too far away to take pictures unfortunately, but they were lovely. They make little chirpy noises as they wave their tails around, it's very sweet. At 8:30 we headed for the restaurant and had dinner with Cynthia and Frank, in what was the best meal we have had since getting into Spain (well, OK, compared to "salty plateful of grease", "nibbling on tinned sardines" and "fruit sandwiches" you can't really go wrong, but it was nice).

It's nice to occasionally run into somebody who speaks your language, and they certainly seemed to be having an interesting time travelling the world with their camper van. Nice to find somebody else who agrees about Spain being very difficult for food. Apparently Portugal is much easier, and we were enthused by descriptions such as "piri-piri chicken everywhere" and "the cakes are lovely". We also went away with a campsite and restaurant recommendation (mmm wild boar casserole) for Braganca, which will be our first stop in Portugal in a few days time.
Posted by Hel at 6:40 pm