We're quite high up, although not quite sure how high. On Monday we travelled from Balmaseda to Espinosa de los Monteros, where we found a campsite, tried to camp, but for some reason or other, were not allowed to. (See, we are actually trying to use our new tent, just not having much luck). However, they did have cheap rooms at the campsite, (it would have been even cheaper if Dgym hadn't inadvertently pretended we were over 30), with free wifi in the room. Pretty nice.

Today we didn't come very far, at least not in the horizontal plane, and got to Soncillo, where we are staying in a very nice guest house. Vertically, we've come quite a way. We've had a lovely descent or two but also climbed a fair bit - over all we have gone up. The sun is pretty harsh, we're grabbing shady spots wherever we can and getting through a lot of suncream.

The eating situation is slightly awkward, they don't seem so keen on it here. It seems to be a choice between nibbling on raciones and sandwiches in a bar, not really a sustaining meal for a cyclist, or going to a cafe and having platos combinados - described as potatoes, eggs and chorizo, for example, but turns out to be an extremely greasy salty plate of fried egg & chips with chorizo. We did find a proper restaurant last night but it was about 25euro a dish, way out of our budget. We're getting by anyway, and supplementing the bar food with tins of sweetcorn, olives and lots of fruit.

There are a lot of flies up here, which is pretty annoying, they seem to gather particularly in the bars and eating areas. (Right now I would really like to sit down to a nice big roast dinner without flies swarming around my head). 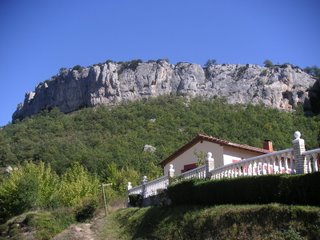 The views have been lovely. We've been cycling past / around a set of mountains which are covered in forest, and topped by sheer cliff faces - which, at the start of yesterday, seemed a long way off and very high up. They now seem pretty close and not so far up at all. It's hard work climbing up, but the views are spectacular and very much worth it.

The cycling experience is similar to France - we get lots of people waving at us and saying hello, and drivers honking their horns in encouragement (at least I hope it's encouragement). The people are friendly, we know pretty much no Spanish but that doesn't stop anybody chatting to us! We had a nice chat with a deaf-mute bloke this morning, actually the most coherent conversation we've had here, as he was obviously good at using alternative means of communication.

Today we did a bit more up and a bit more down. After one climb we were actually looking down on the tops of the cliffs that had seemed so very far away and so very far up yesterday. Unfortunately the town we ended up in was very small and we failed to get any food before finding out that the only restaurant shut early and was staying shut. We made do with what we had - pear sandwiches. Not a great ending to an otherwise very pleasant day.
Posted by Hel at 6:38 pm