On Sunday we left Poland, a little earlier than planned as we'd got a bit tired of the mozzy swatting (a few still managed to get in despite our ingenius contraption) and the heat - although this did mean leaving behind mountains of cheap enormous juicy cherries, and piles of moist delicious cake. Our ferry left at 10pm from Swinoujscie, so we decided to leave our room in the morning and cycle into Germany for one last Eiscafe experience.

This one contained chocolate and vanilla ice cream with chocolate sauce, topped with two truffles: 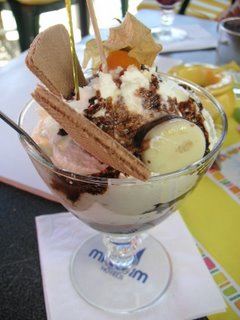 This is Eis und Heiss - vanilla ice cream separated from a layer of warm sour cherries by an insulating biscuit layer: 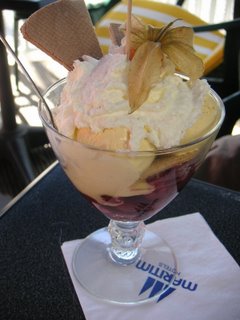 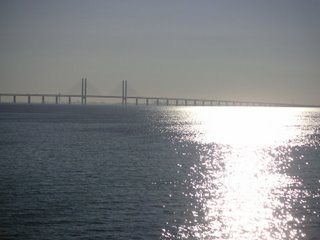 The ferry cabin was cheap, not particularly comfortable but we got a reasonable night's sleep until we were brutally woken at 7am by the announcement that we'd be arriving in an hour and a half, and breakfast was available in the cafe. All excited to wake up in a new place, I jumped out of bed and headed for the decks - on the left you could see the coast of Denmark, with a line of wind turbines queuing up to greet us, and on the right hand side was the huge Oresund bridge from Copenhagen to Malmo, with Sweden in the distance. We're not planning on visiting Sweden in the near future (too expensive), but it was nice to wave at it all the same.

Copenhagen seemed like a pleasant city, lots of nice watery bits and the busiest part seemed to be the cycle lanes. We only really stopped to get money, a map and some pastries but it's probably worth a longer visit at some point when we can afford Danish prices. The pastries were lovely - as well as the familiar fruity-centered wonders you get in England, there are also pastries featuring sesame seeds, poppy seeds and honey. And Danish money is awesome - when you have coins with holes in, that seems like a good enough reason not to adopt the Euro. 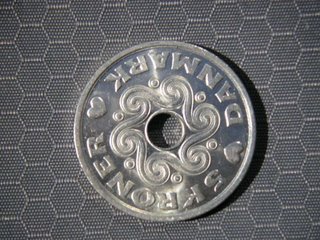 Our first day cycling in Denmark wasn't so good, we ended up on a cycle path along a noisy main road from Copenhagen to Roskilde. We weren't in the best of spirits by the time we reached Roskilde, so decided to stop for the night, use the tent for its intended purpose, and head for the town campsite. The campsite was very pretty, on the shores of Roskilde Fjord, you could see the town across the water. It was quite a cramped night as dgym is a bit too long for the tent, but it was lovely to wake up and look out over the water. We also got online that evening and booked our ferry home for two days later - Denmark is about as expensive as England so we can't really afford to stay for long.

On our second day we took the train from Roskilde, taking us away from the island of Sjaelland, across the island of Fyn, and to Kolding, in the east of the Jutland mainland. Getting on the train was a bit of an ordeal - we were warned beforehand that we'd have to disassemble dgym's trike so we spent 45 minutes doing this on the platform before the train arrived, during which we managed to use most of the useful bits and pieces we had with us (cable ties, duct tape, string, luggage straps). We arrived in Kolding about 4pm and spent most of the evening getting to Vejen, by means of lots of pretty little lanes winding through farmland - it was a really lovely afternoon's cycling. We arrived at the campsite in Vejen very hot and grubby and were immediately directed to a restaurant which was about to close but would feed us if we hurried. So we showed up at the restaurant hot and grubby and smelly, freshened up and then had a lovely meal. We got back to the campsite just in time to put up our tent before darkness fell. 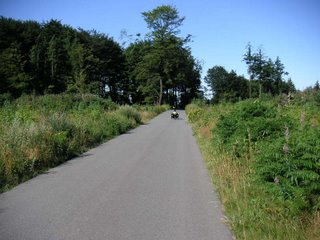 On the Wednesday we woke at about 6:30am, eventually decided we weren't going back to sleep, got up, packed and left about 8:30 loaded with fresh water and peanut cookies from the campsite shop, with the aim of getting to Esbjerg for our 7pm ferry. We did pretty well, reached Esbjerg about 1pm and found a Spar and a shady spot, just as the midday heat was threatening to roast us alive, our water levels were very low and we were in need of some lunch (we went a very long way without seeing a shop or pub). We lurked in shady spots all afternoon before boarding the ferry.

We've had a lovely couple of days cycling in Denmark - we've seen hills and flats, fields of wheat, woodland, heathland, cows, horses and lots of butterflies. In many ways it's similar to the Netherlands - a good and well-used cycle network, friendly people who speak incredibly good English, quite expensive, lots of farmland - however, Denmark is hillier and the landscape is more varied, making for more interesting cycling.

Ordering the ferry tickets back to the UK was done via the internet using my phone - not a very cheap thing to do at all, which explains my panicked state at the time. This is how we ended up with tickets for the Wednesday 19:00 sailing from Esbjerg - which was only four days cycling away. It isn't possible to cycle from one port to the other anyway, you have to get the train over one of the bridges as they didn't bother with a cycle path along the motorway, we just got on the train a little earlier than we had to, and didn't get off quite as soon as we could have. The bridge is 20km across and we were on the train for 200km, but at least we were in a good position to get to our ferry on time.

There was a small problem with taking my trike on the train, the lady at the ticket desk actually came out to look at it and I explained which bits I could take apart and the final decision was that if I disassembled most of it it would probably be ok but it was up to the conductor in the end. So we went to the platform and I spent half an hour taking the front wheels and the seat off and making the trike shorter as well. When the train arrived there wasn't even a hint of a problem from the conductor, and there was plenty of room for the trike in its road going state, but never mind.

By the time the train had arrived in Kolding and I had put everything back together again it was gone four o'clock and we set out for Vejen which was another 20km away. This turned out to be one of the best bits of cycling that I can remember. The sky was perfectly blue but the sun wasn't unbearable and the terrain was varied with some challenging enough hills. The countryside was really beautiful and there were plenty of horses, sheep and cows to see along the way. In a way it was a bit of a shame as it was very similar to England, and it reminded me of how good England would be for cycling if it didn't have such a car problem.

We arrived in Vejen quite late, but one nice thing about camping is that this isn't a problem - there was still plenty of room. One problem in Vejen is that it has 5 pizza/kebab shops and no restaurants, even a friendly local didn't know where a restaurant was, and was quite sure there wern't any left. Luckily the lady at the camping ground knew of one and kindly phoned to check that they were open, which they were but only for the next 20 minutes. So it was a mad dash for food that turned out to be thouroughly worth it - I almost wept when I discovered that the vegetables were lightly curried - followed by another mad dash to get back to the campsite and put up the tent before the sun went down. We made it with about 5 minutes to spare.
Posted by Hel at 12:17 pm

Woohoo! On the road again.