There are two times of year that I consider to be cycling season in this part of the world - April/May and September/October. There are a few reasons for this...

1. Temperatures are reasonable. Although there is often some leftover winter chill in April and September can still be quite hot, it's not usually unbearable in either direction.

2. With about 12 hours of light in the day, there's enough time for a good day's cycling but it's still easy to experience both sunset and sunrise with a good sleep in between.

3. With many people taking advantage of school holidays in July and August, tourist areas are usually open but less busy in the spring and autumn months. This makes things a bit more pleasant, and it's much easier (and often cheaper) to find somewhere to stay.

The benefits of moderate temperature became clear last week when with some time off work, a new tripod and a hired 10-22mm lens from Lenses For Hire (my new favourite people since I turned camera geek) I took off for the Dorset coast.

It was the first time in over a year that I'd ridden fully loaded - if you can call it that. Full camping gear but no kitchen kit, woolly thermals or winter hat. The extra camera stuff probably made up for that a little bit but I was still travelling lighter than usual.

London suffered a heatwave that week (well, 30C) - it looked as if Dorset would remain several degrees cooler but it didn't feel that way. I dawdled about packing all morning and set off into the heat at 1pm. The first few miles were good but once I hit the Dorset Downs there didn't seem to be a lot of shade and I turned into a melty exhausted heap of sweat, dust and suncream. The road surface seemed a little too shiny in places and the mass of grit that ended up stuck to my front tyre confirmed that yes, the road had been melting.

I pulled into the village shop at Piddletrenthide with one water bottle still full but warm enough to take a bath in. Piddletrenthide is lovely - it's a pleasant and quiet village with an amusing name, a nice little shop and there always seems to be somebody to smile at you in the street. I stocked up on delicious tasty cold water and some snacks.

When you're a pale and pasty person stuck out in baking heat all day long, several applications of suncream are needed throughout the day. It can be very easy to miss a bit just once - this time it was my arms and I ended up with a lovely pair of permanent pink arm warmers, which make me look a bit stupid in a sleeveless top. 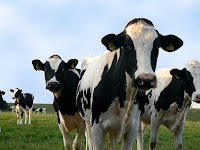 Near Puddletown I needed to cross a dual carriageway, the A35. Dual carriageway is a rare occurrence in Dorset and every encounter must be savoured. Spotting a footbridge, I pulled off the road, opened the gate and started to wheel my bike up the dusty path. Another gate stood at the top, I peered around and noticed an adjacent field of cows. A couple of nights previously I'd had a dream about being chased by an over-enthusiastic herd of cattle while out walking, and in general I prefer it if they stay on their side of the fence and I stay on mine.

Checking that they were definitely enclosed within a field I opened the pedestrian gate and pushed my bike through, started to turn right onto the bridge and... oh, look. Several enormous Friesians were trotting merrily across the footbridge over the A35 in my general direction. Arrrgghh! The bike was reversed, the gate was closed and the cows and I greeted one another cordially if somewhat tersely before I wheeled back down in search of an alternate route. Yeah, I'm a wuss. But that was clearly their side of the fence.

The land between the Dorset Downs and the coast consists mostly of quite gentle gradients. I was hot and exhausted but things were easy until I reached Lulworth where I coasted down a long hill into the village. My destination was Durdle Door campsite, situated close to the coast near the rocky landmark of the same name, and about a mile outside West Lulworth. And, as I had obviously forgotten from previous visits, up a massive hill. It was long, straight and probably at least 12%, I was knackered and walked the bike all the way up (as I have explained before, not the easy option!)

The campsite wasn't far from the top of the hill, it was quite busy but there was room for a small tent. I pitched up, went straight for the campsite pub and ordered nachos. Oh yes... the nachos. Are they technically still nachos if you serve them with no sour cream, no guacamole and no jalapenos? I'm pretty sure that should be illegal, and I'm very sure it is an insult to nachos. So I had crisps with melted cheese and chicken & tomato sauce for dinner. After a day of munching on Tracker bars I felt a bit cheated

I took a quick walk along the cliffs to catch some sunset and take a few photos before returning to the tent. My head hit the mattress and I was asleep straight away.
Posted by Hel at 10:50 am