Tuesday March 6th - it's further than you think 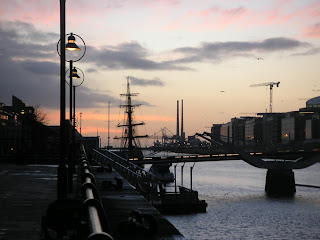 Dublin didn't make the best of impressions on me - perhaps I was there at the wrong time on the wrong roads but the traffic was absolutely horrible, worse than London - it was almost impossible to join or cross a stream of traffic and the whole thing seemed to be a giant network of one way systems.

It's a bit strange being in Ireland, it's sort of foreign but then again it's not really. They speak the same language, but it sounds a bit funny and I often can't understand it. They drive on the left, use the same power sockets, have the same magazines on the shelves (but different newspapers). The station announcements are in an English accents and the train toilets smell the same. They drink lots of tea (with milk) and watch Eastenders - but they use Euros and kilometres and everything's just a bit different. It's easy to forget you're cycling in a foreign country - you're on the left hand side of the road, you can understand the signs... and then you ride past a green post office.

To take a bike on the train in Ireland you need to buy a separate ticket for the bike. I'm not sure what the rule is for pricing, but my bike ticket cost 16euro, compared to my passenger ticket at 37euro. I wasn't able to take my bike on the first train out as it wasn't a full service and didn't have any room for it - however, the next one had a guards van which could take it.

I knew it would be a long way from Athenry to Doolin, 30-40 miles according to my map. Athenry (which, as I had to be corrected at least twice, is pronounced Athen-rye) is the closest functioning railway station to Doolin, although they are currently in the process of restoring a previously closed line (take note, England!) which would mean only about twenty miles to the nearest. I believe that's due to reopen in 2008. 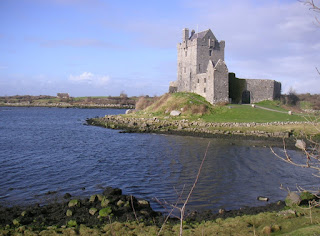 The first twenty miles were fine, the land was reasonably flat (north Germany flat) and the scenery was pretty - lots of fields bordered by dry stone walls, and the occasional ruin. There are lots of sheep and cows here, and the calves and lambs are out now. The cows here are lovely, and Spain has some tough competition on that front. Kinvara was particularly pretty with a lovely castle on the water. 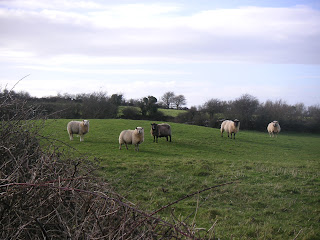 I had a rather scary encounter with a horse which was very spooked by me and / or my bike, and its rider was having quite a bit of trouble controlling it. It got quite close, making that scary toothy horsey face that they make and trying to rear up at me. There were a couple of rather excitable dogs too - the first one I could see was trying to chase after every car that passed, so being perhaps a little paranoid after Portugal I got off and started walking. It padded over and started sniffing me, it was quite friendly and let me walk off after a while. The second was a yappy little thing that wouldn't stop barking at me, even with its owner calling.

After entering County Clare, the landscape got a little more hilly and I was
starting to feel the effects of my two hours' sleep (or more accurately, the effects of my lack of six hours sleep). I was riding along a fairly major road (an 'N' road) but you'd hardly think it was to look at it. Single carriageway, surface not very well kept and about as many cars as your average English 'B' road on a Sunday afternoon.

The weather was occasionally sunny, occasionally rainy and windy, and at some point I lost the cleat from my right shoe, so I could only clip in on one side. I reached Ballyvaughan, still about fifteen miles from Doolin, and left the coast to take the inland road to Lisdoonvarna. Supposedly it was 16km but I think they have rather strange kilometres around here, because it was the longest 16km I've ever ridden. It was getting dark as I set out along that road - I was hoping to make it to Doolin before sunset but it wasn't going to happen.

There was one big hill to get over before Lisdoonvarna, and it was one of those big looming ones. The road wound up it quite gently, like one of those nice mountain roads in France or Spain, but it was still hard work. I got off and walked a couple of times - it doesn't feel like so much of a cop-out to do that any more, walking a loaded touring bike is every bit as hard as riding it, if not harder, and it gives the cycling muscles a break and the walking muscles a bit of a work out. I reached the top and was hoping for a nice fast downhill to Lisdoonvarna but that didn't come for quite some time and there were several more kilometres of gentle ups and downs before the road went down.

I was really hungry and really tired but the worst of the hills was over and 7km is only about four miles, that's like cycling into town and back. So I carried on, always looking out for that gentle orange glow on the horizon that meant civilization - and eventually I arrived at Doolin, wet tired and hungry. My B&B was easy to find, and the room was nice. I dumped my stuff, got changed and walked 2 minutes to the nearest pub for some nice soup followed by roast pork & vegetables. mmmmm...
Posted by Hel at 1:37 pm

I saw you mentioned taking your bike on the train in Ireland. I've been trying to find out some info on this for my upcoming trip. Did you figure out how to determine which trains would accept bikes and which did not?
cycln96@yahoo.com

On the line that I used (Dublin - Galway intercity) it seemed to be that if the train was indicated on the timetable as having a first class carriage, it was a "full" service and would also have a luggage van. I could be wrong though, and I'm not sure about other lines.

There's a little more info at cycletourer and a couple of accounts of bikes on trains on bikeaccess
(which is a really great resource for travelling with your bike in general).

Probably best to check with Irish Rail if you're unsure... and of course there's the buses too which also take bikes and cover a much greater area.

Have a great trip anyway - which part of Ireland are you going to?