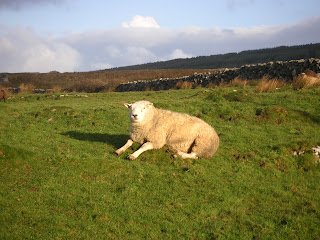 I wasn't sure until I got up on Friday whether I'd be riding my bike to Athenry that day, or throwing it in the back of a bus (according to the bus driver on Thursday, you can do that). It all depended on the weather

I couldn't have asked for nicer weather. I woke up a couple of times during the night to the sounds of wind and rain, and it was still quite windy when I got up at six, but the sun rose to reveal hints of blue sky and a brief trip outside determined that the wind was blowing the right way, so at about 7:30 I got on the bike and left. It was a lovely ride, there was the occasional dark cloud and threat of rain but it held off and I rode 45 miles with lovely morning blue skies overhead and the most fantastic tailwind - I'm really glad I didn't take the bus. 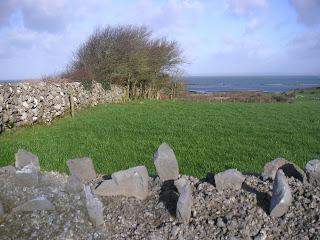 I got to Athenry around midday, with plenty of time before the 15:18 train. Miraculously, it started raining as soon as I'd reached my destination (Something is not right with all this) so I ducked into a pub for a couple of hours before getting on the train for Dublin.

Dublin traffic was no more pleasant than it was on Monday, after my few quiet days on the west coast it was a shame to find myself swearing at other road users again, this time there was further to go on busier roads, and it really doesn't help that the only indication of a street name is a tiny little sign written in tiny little letters really high up, and you often have to stop and look behind you to find out the name of the side street you just passed. I found the B&B eventually, which was run by a sweet little old lady named Moira, who was very helpful with giving me directions for using the buses and for getting to the ferry port the next morning. (but what is it with the creepy Jesus-pictures in some of these B&B rooms? I'd really rather he didn't watch over me as I sleep...)

I got the bus into town in the evening, with the intention of trying to find some of the nicer bits of the city - but in the end it was too cold out and I was too tired and didn't feel like wandering around busy drunken Friday night streets trying to find nice places which I'd probably rather see in daylight anyway. I did see the giant needle thing at least. It was big and pointy.

I ate at 101 Talbot street which was quite nice. It's not been as weird eating out on my own as I thought it would be (I've only ever done that at sushi bars, which are kind of different) - I thought it might be a little strange not having anybody sitting opposite me but it wasn't really, I'd normally just get caught up in daydreaming, reading and/or just enjoying the food.

I slept really well at the B&B and had yet another early start to get to the 8:45 ferry. It's just as well Dgym didn't come on this trip, he'd be hating all the early mornings. The B&B was on the right side of town for the ferry port so it was nice not to have to go through the town centre again and the traffic was OK.

The bicycle procedure for the return journey was a little different. I went to the foot passenger terminal where I was given a boarding pass and then had to ride around to join the rest of the vehicles. They have a hand baggage policy in which you're only supposed to carry one bag onto the boat, the rest gets checked in or left in the car. They gave me the option of leaving the panniers on my bike rather than checking them in, which I decided I'd rather do than sit around waiting to reclaim them - it was nice not to have to wander around the ferry with two heavy bags. Again there was nothing to tie my bike to but it managed to stay upright. The crossing was fairly rough but thankfully short.

Ireland was great anyway. The scenery was beautiful, the people friendly, the weather highly changeable. I definitely want to visit County Clare again and see everything I couldn't see this time - the Aran islands (the Doolin->Aran ferry doesn't start up until April), the caves (Doolin cave was only open at weekends) and some more of the Burren region.

Lots more pictures of my Ireland trip
Posted by Hel at 7:26 pm

Nice to read about your expeditions on the Emerald Isle Hel!

I'm looking forward to reading about Dgym throwing himself off Spanish mountains.

I've also started keeping a recod of my adventures on Beaatrice, my Trice QNT.

I would like to invite you to add your sport blog link to our Sports Blogs Catalog at http://www.sportsblogscatalog.com

Please, surf to the category best suiting for your resource and suggest your link there.